What does Artemas mean?

[ 3 syll. ar-te-mas, art-em-as ] The baby boy name Artemas is pronounced as AARTiyMah-Z †. Artemas is used chiefly in the English language and it is derived from Old Greek origins. The name is of the meaning follower of Artemis; safe; butcher. A biblical name, it is derived from the elements 'artemes' meaning safe ; 'artamos' butcher. The original form Artemisios (Old Greek) is from Artemis, the name of the Greek goddess, and Artemas is a short form of Artemisios as well as other names containing the Greek goddess' name. In the Bible, a man named Artemas was briefly mentioned in Paul's letter to Titus; consequently, the name was adopted by 17th-century Puritans. The name Artemis (English and Greek) is the female form of Artemas.

Artemas has 14 variants that are used in English and other languages. Variants used in English include Artemesia, Artemis, Artemisia, Artimas, Artimis, Artimus, Tamus, and Tim. The short form Art, the pet form Artie, and the variant spelling Artemus (also Latinized) are other English forms. Artemi (Russian), Artemio (Spanish), and Artyom (Russian) are foreign variants of Artemas.

Artemas is a rarely used baby name for boys. It is not listed in the top 1000 names. 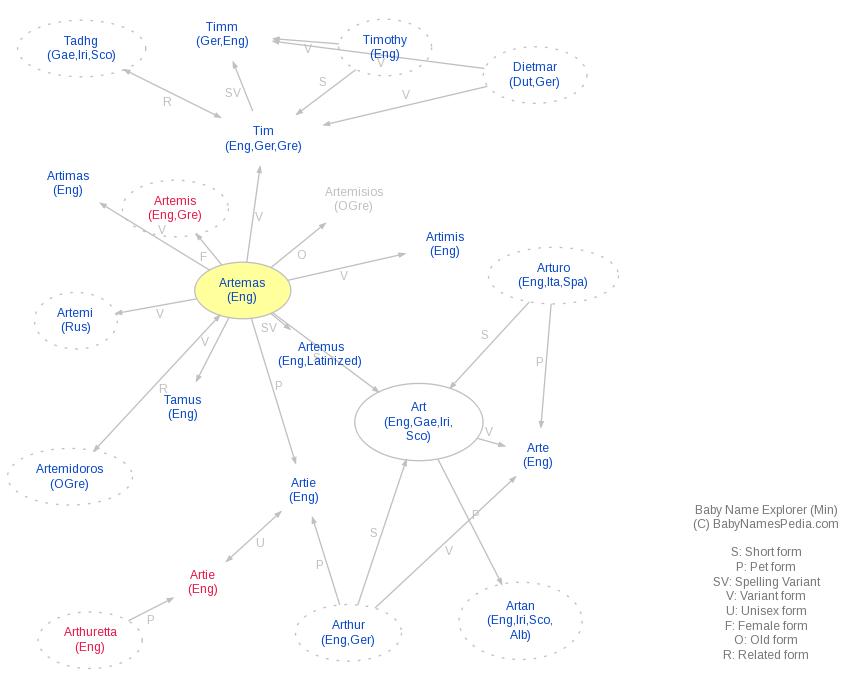