What does Artemis mean?

[ 3 syll. ar-te-mis, art-em-is ] The baby girl name Artemis is also used as a boy name. It is pronounced AAR-Tah-MihS (English) †. Artemis is of Old Greek origin. It is used mainly in English and Greek. The name Artemis means 'follower of Artemis; safe; butcher'. The name is of debated origin; it could be from the Greek artemes or artamos, or else it could be pre-Greek. It was borne in Greek mythology by the goddess of hunting and the moon; she was the twin of Apollo and the equivalent of the Roman goddess Diana. Artemisia II was the 4th-century BC builder of the Mausoleum, one of the seven wonders of the world. In the 19th century, the name Artemis was given to the granddaughter of the famed beauty Lady Diana Cooper, possibly taken from her grandmother's name Artemisia. Artemis is the feminine version of the English Artemas.

Artemis has 11 forms that are used in English and foreign languages. English forms of the name include Artema, Artemia, Artemisa, Artemise, Artemisia (also used in Greek and Italian), Artemiy, Artemus, Artemys, Artemysia, and Artemysya. The Armenian Ardemis is a form of Artemis that is used in foreign languages.

Artemis is not often used as a baby girl name. It is not in the top 1000 names. 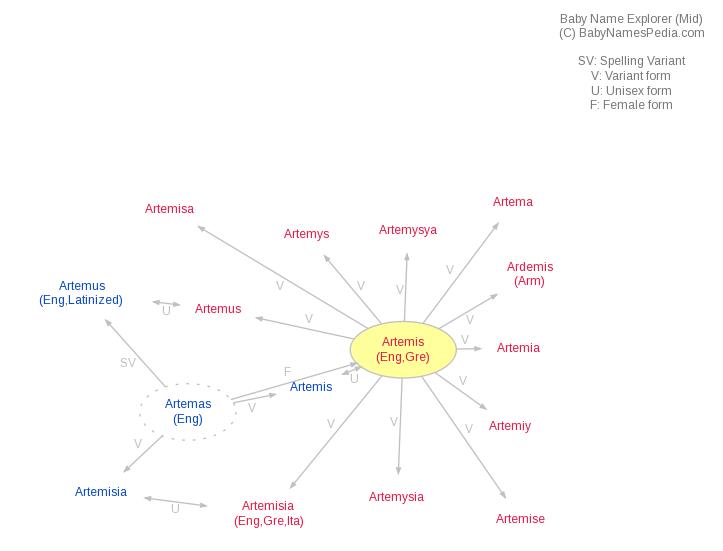