What does Arthur mean?

Arthur is used predominantly in the English and German languages, and its origin is Celtic. It is from the elements 'art' meaning stone, bear ; 'artus' tight. Artorius (Latinized) and Artus (Old English) are old forms of Arthur. The name is of obscure Celtic origin; it could be derived from the Celtic 'artos' (bear) or the Irish 'art' (stone), or from the Roman family name Artorius. It could also be Germanic in origin. A Roman officer with the latter name has been suggested as a historical basis for the legendary King Arthur, who is believed to have reigned in the 5th or 6th century. The 'th' in the English name is not found prior to the 16th century. Arthurian legend contributed to the vast popularity of the name. Three other princes, namely Henry II's son (1187-1203), Henry VII's son (1486-1502) and Queen Victoria's third son (1850-1942) also bore the name as Prince Arthur. The name Arthuretta (English) is the female version of Arthur.

Arthur is a widely used name; it has 36 variants that are used in English and other languages. Variants used in English include Aata, Are, Arrt, Arte, Arth, Arthel, Arthor, Arthos (used in Irish and Scottish too), Arthuro, Arthus, Arthyr, Artor, Artro, Arturas, Arturo (used in Italian and Spanish too), Aurther, Aurthur, and Authur. Other English forms include the contraction Art (used in Gaelic, Irish, and Scottish too), the pet forms Artie and Arty, and the variant spellings Arther and Artur (used in German, Hungarian, Irish, Italian, and Polish too).

Arthur is of Germanic origin. The meaning here is thor, the eagle. An old form of the name is Arnthor (Germanic).

The English name Arnthor is a derivative of Arthur.

Arthur is a classic favorite. Today it is still popular as a baby name for boys, though it was in more widespread use before, and it is also regarded as trendy. At the peak of its usage in 1901, 1.149% of baby boys were named Arthur. It ranked at #14 then. The baby name has since suffered a substantial decline in frequency. In 2018, its usage was 0.085% and its ranking #230, having regained some lost ground in the recent decade. Out of all boy names in its group, Arthur was the most popular. In 2018, 4 times more boys were named Arthur than the next ranked name, Arturo. 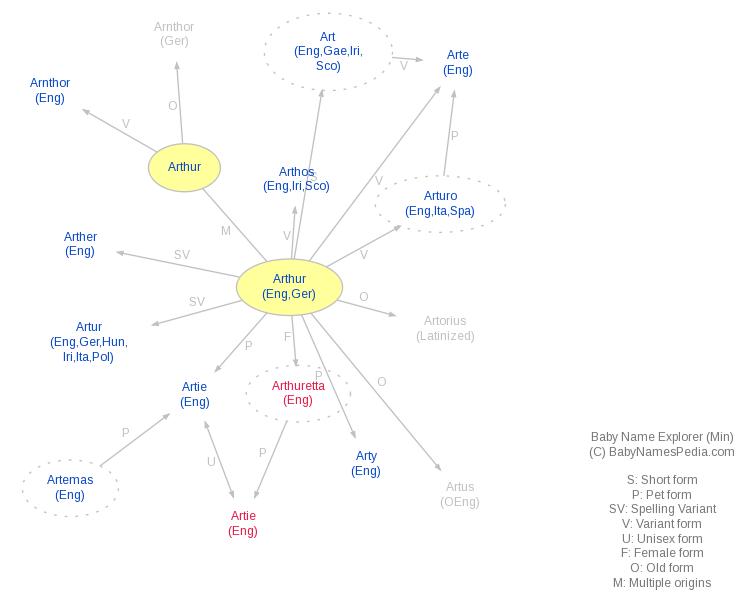