What does Arturo mean?

[ 2 syll. ar-tu-ro, art-uro ] The baby boy name Arturo is pronounced aa-RT-WRow †. Arturo is of Celtic origin, and it is used mainly in the English, Italian, and Spanish languages.

In addition, Arturo is an English, Italian, and Spanish form of the English and German Arthur.

Forms of Arturo include the names Arthuro and Arto.

Variant forms inherit both the origin and meaning of the name Arturo.

Other variants of Arturo include the English pet form Arte and the English, Gaelic, Irish, and Scottish short form Art.

Arturo is an all-time favorite. Currently it is still fairly popular as a baby name for boys, though it was in more widespread use previously. The name rose in popularity from the 1910s up to the 1990s. At the modest height of its usage in 1996, 0.053% of baby boys were given the name Arturo. Its ranking then was #265. The baby name has since experienced a decline in frequency. In 2018, it ranked at #608 with a usage of 0.023%. Within the group of boy names directly linked to Arturo, Arthur was the most frequently used. Its use outnumbered Arturo's by 4 times in 2018. 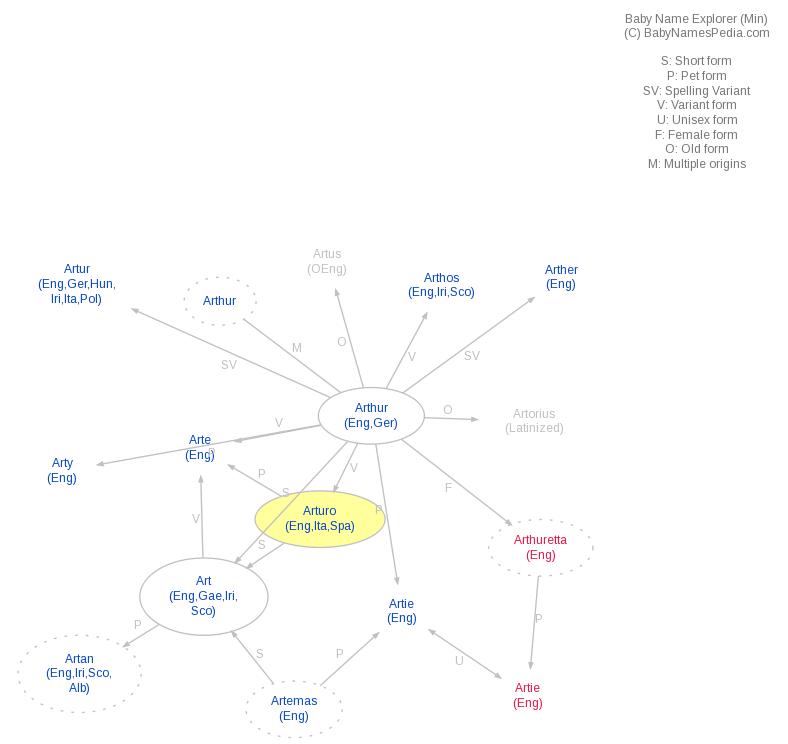