What does Arun mean?

Arun is used predominantly in the Indian language and its origin is Sanskrit. The name's meaning is reddish-brown-haired. The name Aruna (Indian) is the female version of Arun.

The name Aruns is a variant of Arun.

Arun is of Cambodian origin. The meaning here is 'sun'.

A variation of Arun is Arun (Cambodian).

In addition, Arun is a variant of the name Aaron (English, German, Hebrew, and Polish).

Arun is also a variant (Cambodian) of the name Arun.

Arun is uncommon as a baby boy name. It is not listed within the top 1000. Out of the family of boy names directly related to Arun, Aaron was the most frequently used in 2018. 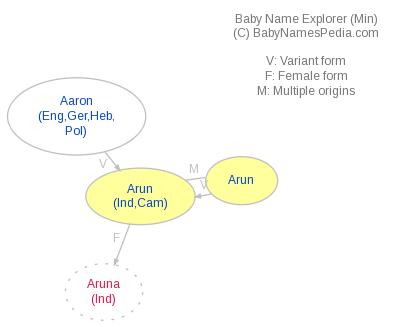