What does Aryan mean?

[ 2 syll. a-ryan, ar-y-an ] The baby boy name Aryan is sometimes used as a girl name. It is pronounced as aaRJHAHN †. Aryan is an English, Tajik, Iranian, and Kurdish name of Latin, Albanian, Old Greek, and Persian origin. From Persian roots, its meaning is noble; related to Aryans - in this context, Aryan can be used in the Iranian and Kurdish languages.

In addition, Aryan is a variant (English) of the name Adrian (English, German, Polish, Romanian, and Russian).

Aryan is also a variant (Tajik) of the name Arian (Albanian and English).

Aryan is also a variant of the name Arion (English).

The name Aryana (English, Italian, and Iranian) is the female version of Aryan.

The name Arain is a variant of Aryan.

Aryan is somewhat popular as a baby name for boys. The name rose in popularity during the 2000s; before that, it was of infrequent use only. Its usage peaked modestly in 2007 with 0.018% of baby boys being given the name Aryan. It ranked at #606 then. The baby name has since fallen in popularity. In 2018, its usage was 0.015% and its ranking #774, but it was nonetheless the 2nd most popular after Adrian, among all boy names in its group. In 2018, it was used 19 times more than Aryan. Aryan has in the past century been mostly given to baby boys. 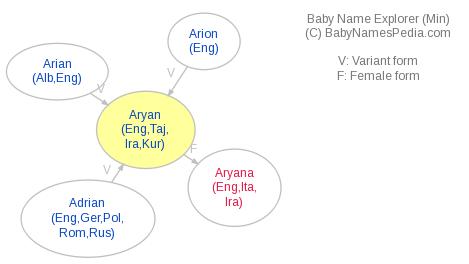