What does Asa mean?

[ 2 syll. a-sa, as-a ] The baby boy name Asa is sometimes used as a girl name. It is pronounced in English as EY-Sah †. Asa is used predominantly in the English and Hebrew languages, and its origin is Hebrew. A biblical name, it is derived literally from the word 'asa' which means doctor, healer. Asa was originally used as a byname. In the Bible, it was borne by an outstanding early king of Judah who reigned for forty years. The biblical connections led to its adoption by the Puritans in the 17th century.

Asaa, Asah, Ase, and Aseh are variants of Asa.

Asa is fairly popular as a baby name for boys. The name's popularity has been growing since the 1970s. Its usage peaked modestly in 2017 with 0.030% of baby boys being given the name Asa. It ranked at #490 then. In 2018, its usage was 0.029% and its ranking #508, and it was the most widely used among all boy names in its group. Asa has in the past century been mostly given to baby boys. 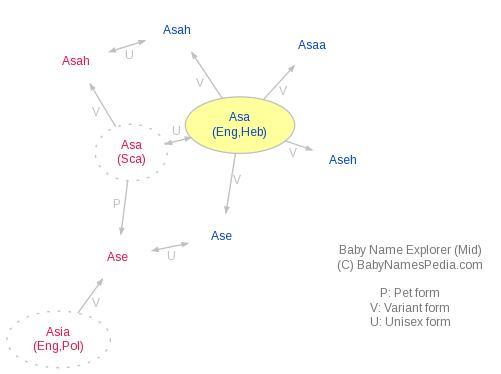