What does Ashanti mean?

[ 3 syll. as-han-ti, ash-a-nti ] The baby girl name Ashanti is also used as a boy name, though it is far more popular for girls. It is pronounced as ah-SHAENTiy- †. Ashanti has its origins in the African language and it is used largely in English. Its meaning is derived literally from the word Ashanti. The first name is taken from the tribal name of a major ethnic people in southern Ghana, who ruled a large empire in the 18th and 19th centuries. The name has often been adopted by Africans to show pride in their ancestry. In recent times, the name has been popularized by the American singer known as Ashanti (1980-).

Ashanti is unusual as a baby girl name. Its usage peaked in 2002 with 0.149% of baby girls being named Ashanti. It was #115 in rank then. The baby name has experienced a substantial decline in frequency since then, and is currently used only on a very modest scale. Among all girl names in its family, Ashanti was nevertheless the most widely used in 2018. Ashanti has primarily been a baby girl name in the last century. 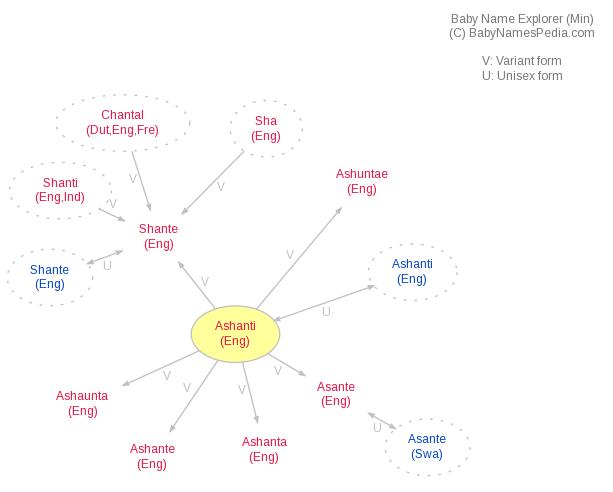