What does Ashley mean?

[ 2 syll. as-hley, ash-l-ey ] The baby boy name Ashley is also used as a girl name, with the latter form being much more common. It is pronounced as AE-SHLiy- †. Ashley is used chiefly in the English language and its origin is Old English. The name is of the meaning ash wood. It is from the elements 'aesc' meaning ash ; 'leah' wood, clearing, meadow. The first name is derived from the surname, itself originally a byname for someone who lived in a place so named, such as an ash wood. The name was first used around the middle of the 19th century, probably inspired by the philanthropist Anthony Ashley Cooper (1801-1885), 7th Earl of Shaftesbury. The popularity of the name was also boosted in the middle of the 20th century by the Academy Award-winning film Gone with the Wind (1939), in which Ashley Wilkes is the man that Scarlett O'Hara secretly loves.

Ashley is unusual as a baby name for boys. Its usage peaked modestly in 1980 with 0.040% of baby boys being given the name Ashley. Its ranking then was #282. The baby name has since experienced a substantial fall in popularity, and is today of very light use. In 2018, among the group of boy names directly linked to Ashley, Asher was the most frequently used. Though Ashley is currently more often than not a girl name, there was a period from 1901 to 1963 when more boys were given the name. From 1964 on, increasingly more girls than boys were named Ashley. In 1994, girls named Ashley outnumbered boys by 239 times. 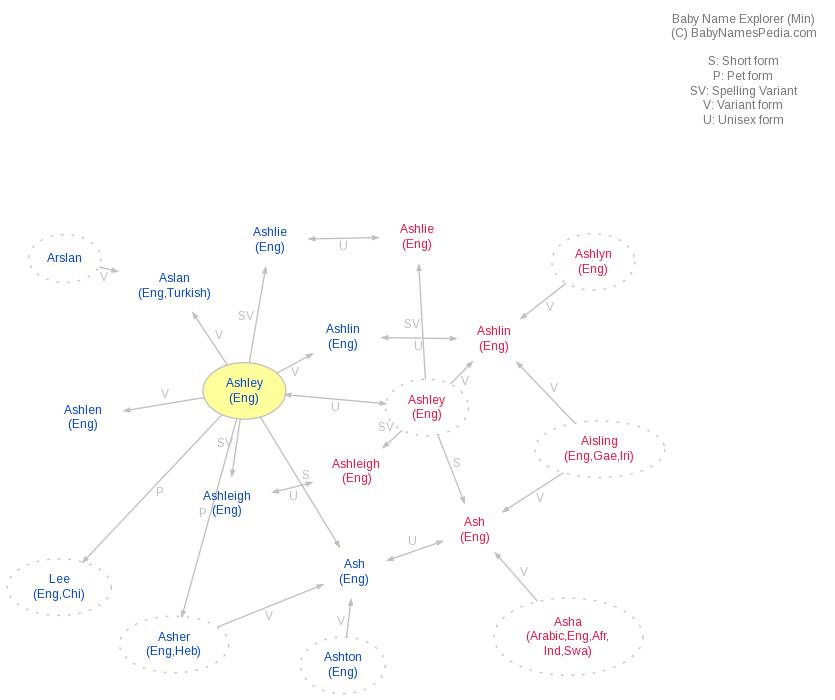