What does Atticus mean?

[ 3 syll. at-ti-cus, att-ic-us ] The baby boy name Atticus is pronounced as AA-Tiy-KahS- or AET-ayK-ahS- †. Atticus is used mostly in English and it is of Latin origin. Atticus, meaning 'from Attica', was the nickname of Titus Pomponius (112-35 BC), a prominent philosopher and close friend of Cicero. Attica is a region in Greece containing Athens. In recent times, the name has been popularized after it appeared in Harper Lee's Pulitzer prize-winning novel To Kill a Mockingbird (1960) as the name of the wise and just lawyer Atticus Finch. Lee based the name of his protagonist on the Roman philosopher.

Another variant of the name is the familiar form Cus.

Atticus is rather popular as a baby boy name, and it is also perceived as rather trendy. The name has been increasing in popularity since the 2000s; prior to that, it was of very modest use only. At the recent height of its usage in 2018, 0.053% of baby boys were named Atticus. It was #326 in rank then. Within all boy names in its family, Atticus was the most widely used in 2018. 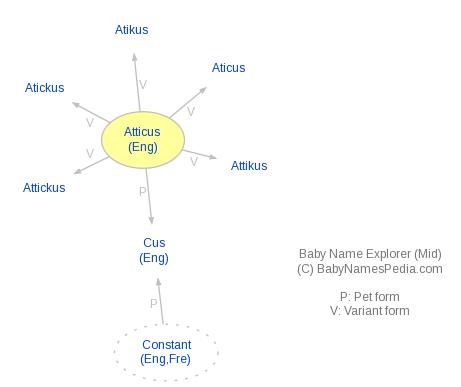