What does Aubrey mean?

[ 2 syll. au-brey, aub-r-ey ] The baby girl name Aubrey is also used as a boy name, though it is far more popular for girls. It is pronounced AO-BRiy- †. Aubrey is of Germanic origin and it is used mainly in English. The name Aubrey means 'elf ruler, supernaturally powerful'. It is a two-element name derived from alf and ric which are of the meanings 'elf, supernatural being' and 'rich, powerful, ruler' respectively. The feminine use of the name became more prominent from the late 19th century, perhaps influenced by the name Audrey. See Aubrey for more information.

Aubrey is very popular as a baby girl name. The name has been rising in popularity since the 1970s; prior to that, it was of only sporadic use. At the modest peak of its usage in 2012, 0.417% of baby girls were named Aubrey. It had a ranking of #15 then. In 2018, it ranked at #36 with a usage of 0.281%, and it was the 2nd most popular after Avery, out of all girl names in its family. It was 55% more popular than Aubrey in 2018. Although Aubrey is today more frequently used for baby girls, there was a period prior to 1973 when more boys were given the name. After 1974, increasingly the name became more popular with baby girls than with boys. There were 10 times more baby girls than boys who were named Aubrey in 2002. 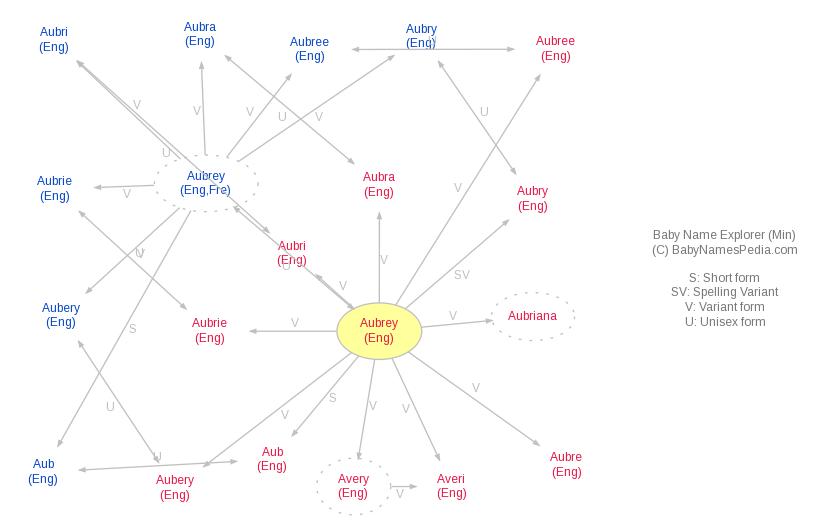