What does Aubrey mean?

[ 2 syll. au-brey, aub-r-ey ] The baby boy name Aubrey is also used as a girl name, with the latter form being much more common. Its pronunciation is AO-BRiy- †. Aubrey is used predominantly in the English and French languages, and it is derived from Germanic origins. The name is of the meaning elf ruler, supernaturally powerful. A two-element name, it is derived from the elements 'alf' meaning elf, supernatural being ; 'ric' rich, powerful, ruler. The name was introduced to England by the Normans in the 11th century, and was used throughout the Middle Ages. It was primarily a boy's name then, and was widespread enough to be adopted as a surname. It later fell out of favor before seeing an increase in use in the late 19th century, spurred by the transferred use of the surname as well as a direct revival of the Norman name. See Aubrey for more information.

Aubrey is a variant (English) of the name Alberich (German).

Aubrey is also a pet form (French) of the name Auberon (English and French).

Aubrey is rare as a baby name for boys. At the modest peak of its usage in 1912, 0.052% of baby boys were given the name Aubrey. Its ranking then was #224. The baby name has since substantially fallen in popularity, and is currently of very light use. In 2018, out of the group of boy names directly linked to Aubrey, Avery was the most frequently used. Though Aubrey is more popular as a girl name today, there was a period before 1973 that it was given more often to boys. From 1974 on, increasingly more girls than boys were named Aubrey. In 2002, girls named Aubrey outnumbered boys by 10 times. 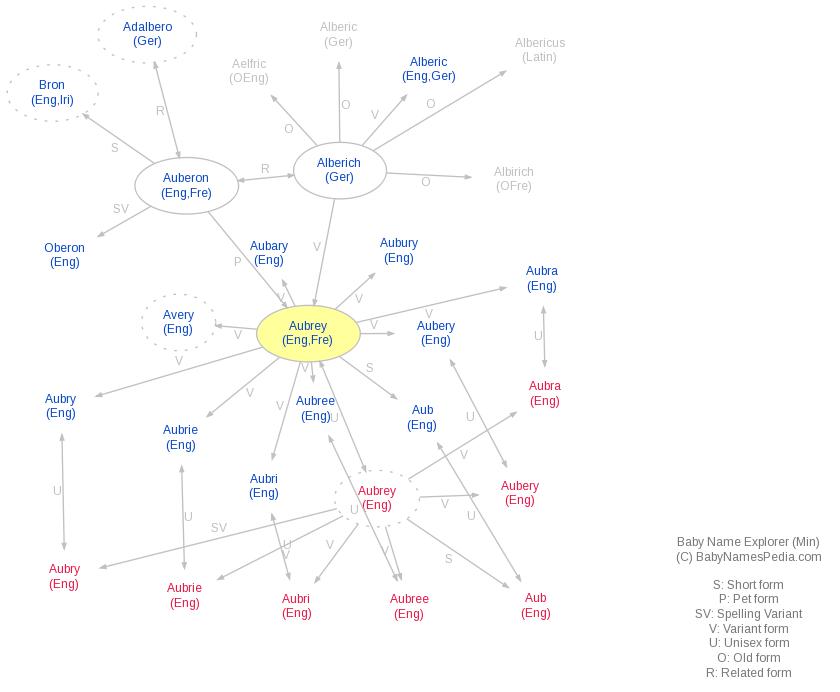