What does Augusta mean?

[ 3 syll. au-gus-ta, aug-u-sta ] The baby girl name Augusta is pronounced ah-GAHS-Tah in English, aw-GUWS-Taa in Italian, or aw-GUHS-Taa in Polish †. Augusta is of Latin origin. It is used mainly in English, German, and Italian. The name Augusta means 'august, dignified, holy'. It is derived from the word augustus which is of the meaning 'to increase'. An older form of the name is Augusta (Latin). The name was in the past usually given to female members of royal families, as Roman emperors were traditionally called Augustus. The name was later borne by Princess Augusta of Saxe-Gotha (1719-1772), who married Frederick Prince of Wales, and popularized the name among English speakers. The name was commonly used at the end of the 19th century. Augusta is the feminine version of the English, German, Polish, and Scandinavian August.

Augusta has 24 forms that are used in English and foreign languages. English forms of Augusta include Agostina, Agostine, Agusta, Agustina, Augustah, Augusteen, Augustia, Augustina, Augustine, Augustus, Augustyna, Augustyne, Austen, Austin, Austina, Austine, Austyna, and Austyne. Other English variants include the contracted forms Gus and Gusta (used in Dutch and German as well), and the diminutive Gussie. Forms used in foreign languages include the German Auguste and the German Gusti. The diminutive Asta (Finnish, German, and Scandinavian) is another foreign form.

Augusta is uncommon as a baby girl name. At the modest height of its usage in 1901, 0.088% of baby girls were named Augusta. It had a ranking of #185 then. The baby name has markedly slipped in popularity since then, and is currently of only sporadic use. Within all girl names in its family, Augusta was nevertheless the most popular in 2018. Augusta has mainly been a baby girl name, although in the last century it has also been used for boys. There were 6 times more baby girls than boys who were named Augusta in 1909. 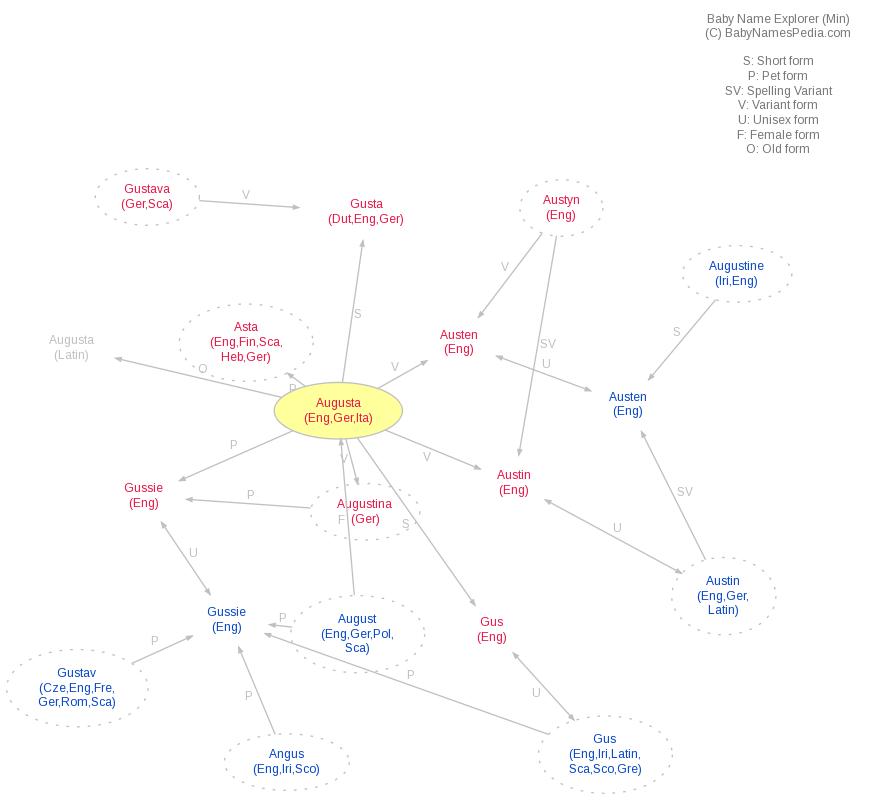