What does Augustine mean?

[ 3 syll. au-gus-ti-ne, aug-ust-ine ] The baby boy name Augustine is sometimes used as a girl name. Its pronunciation is ow-GuwS-TIYN (French) †. Augustine is used chiefly in the Irish and English languages, and its origin is Latin. The name's meaning is august, dignified, holy. It is from the element 'augustus' which means to increase. The name is derived from Augustinus (Latin), which is from Augustus. It was borne by the philosopher and theologian Saint Augustine of Hippo (354-430), a Doctor of the Church who developed the concepts of original sin and just war. Another saint, the Italian Augustine of Canterbury (-604), brought Christianity to the Ango-Saxons. The name was thus popular among medieval Christians, and it saw a revival in the 19th century. In literature, it has appeared as the name of the fictional Father Augustine in Richard Brinsley Sheridan's comedy play, The Rivals (1775).

Augustine is a variant of the name August (English, German, Polish, and Scandinavian) in the Irish language.

The name Augustina (German) is the female form of Augustine.

The name Augustine is widely used; it has 42 variants that are used in English and other languages. Variants used in English include Agaistin, Agosteen, Aguistin, Aguste, Agustine, Agustino, Augusteen, Augustein, Augusteyn, Augustin (used in Czech, French, German, and Romanian too), Augustino, Augustinos, Augusto, Augustus, and Augustyne. Other English variants include the contractions August (used in German, Polish, and Scandinavian too), Austen, Austin (used in German, and Latin too), Auston, Austyn, and Gus (used in Irish, and Scottish too), and the diminutive form Auggie.

Augustine is a somewhat popular baby name for boys. The name's popularity has been rising since the 2010s. At the recent peak of its usage in 2016, 0.017% of baby boys were given the name Augustine. It ranked at #728 then. In 2018, its usage was 0.016% and its ranking #761. Out of the group of boy names directly linked to Augustine, Austin was the most popular. In 2018, it was used 15 times more than Augustine. There were times before 1909 when more girls than baby boys were named Augustine, but currently it is more often than not a baby boy name. In 1939, the name Augustine was given to 42% more baby boys than girls. 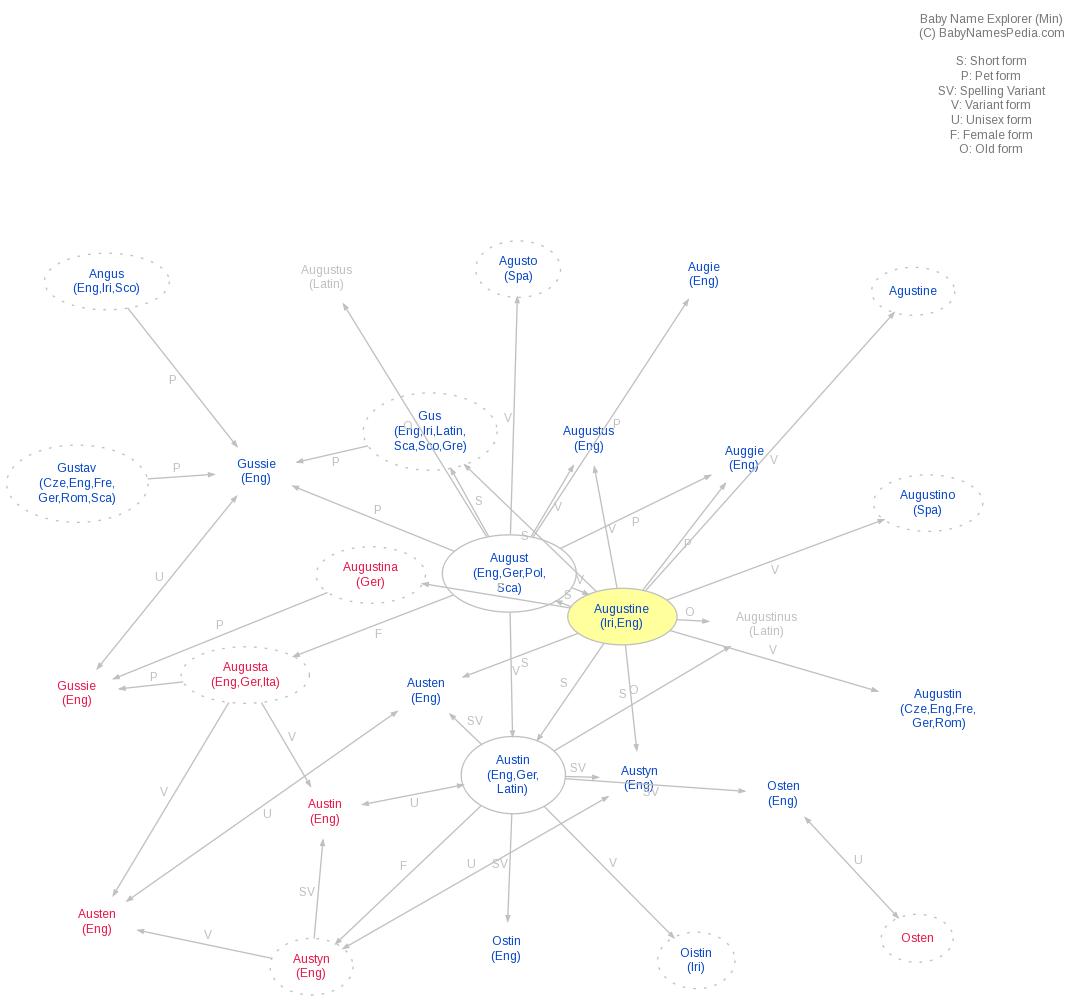