What does Ava mean?

Ava's origin is Germanic, and its use, English and German. The name is of obscure origin. It could be from the element aval or avi and the short form of various female Germanic compound names with the element 'av', such as Avaline, or else it could be of Latin or Persian roots.

It was borne by the 9th-century Saint Ava, who became a Benedictine nun at Dinart, Hainaut; she was also from the Frankish royal family. The name was not often used by the end of the medieval period, but it was later made known in high society by the Philadelphia socialite Ava Lowle Willing (1868-1958), who married the wealthy businessman John Jacob Astor IV, and subsequently Thomas Lister, Baron Ribblesdale; she named her daughter Ava as well. The name later grew popular from the fame of the actress Ava Gardner (1922-1990). In recent times, it was made popular by a number of celebrities who chose the name for their babies, including the actress Reese Witherspoon, who named her baby Ava in 1999.

Ava's language of origin is Latin and it is predominantly used in German. It is derived from the word avis with the meaning 'bird'.

Ava has its origins in the Persian language and it is used largely in Iranian. Meaning: 'voice, song, sound'.

In addition, Ava is an English form of Eva. 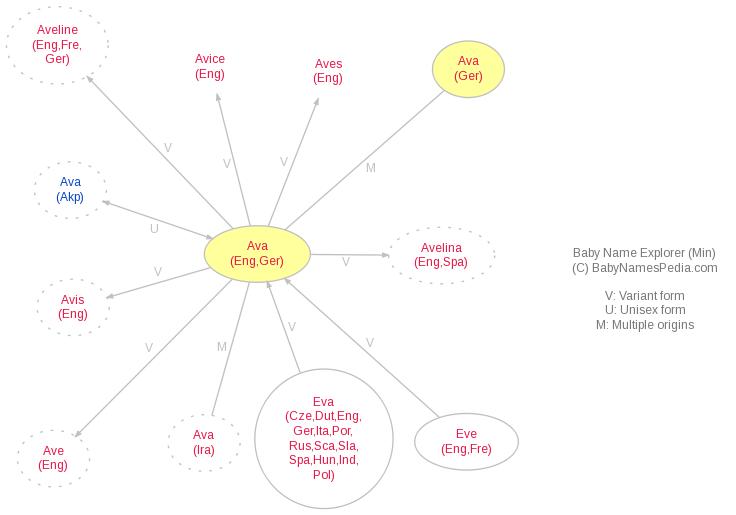