What does Aveline mean?

[ 4 syll. a-ve-li-ne, av-el-ine ] The baby girl name Aveline is pronounced as aa-Vah-LIYIYN †. Aveline's language of origin is Germanic and Old French, and it is predominantly used in the English, French, and German languages. From Germanic roots, its meaning is 'little bird, strength, desired'. An original form of Aveline is Aveline (Old French). The form Aveline originated as an Old French diminutive of the Germanic Avila, brought to Britain by the Normans in the 11th century. It saw a revival in the 19th century along with other medieval names.

In addition, Aveline is a derivative of the English and German Ava.

Aveline is also a derivative (English and French) of the English, Irish, and Gaelic Eileen.

Aveline is also a derivative (English and French) of the English Evelyn.

Aveline is a rarely used baby name for girls. It is not ranked within the top 1000 names. In 2018, among the group of girl names directly linked to Aveline, Ava was the most widely used. 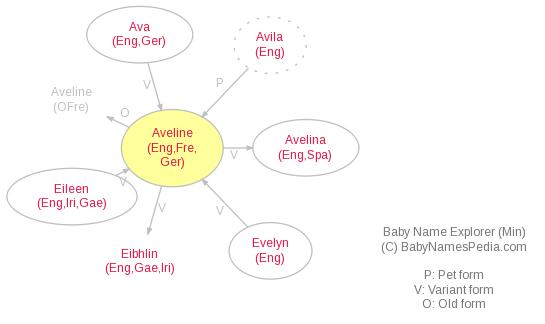