What does Avis mean?

[ 2 syll. a-vis, av-is ] The baby girl name Avis is pronounced AHVihS †. Avis is of Germanic origin and it is used mainly in English. Avis' meaning is 'bird, desired'. An older form of the name is Aveza (Germanic). Aveza was introduced to England by the Normans, and is itself from various names starting with 'Av-' and containing the element avi of uncertain meaning. However, this origin is debated. Avis was popular in the late Middle Ages, as it was often associated with the Latin feminine noun avis. In literature, a form of the name has appeared in the Thomas Hardy novel The Well-Beloved (1897) as the name of the fictional character Avice Caro.

In addition, Avis is a form of the English and German Ava.

Avis is also an English form of the English and German Hedwig.

Avis has 16 forms that are used in English and foreign languages. English forms include Avais, Aveis, Aves, Avi, Avia, Aviana, Avianca, Aviance, Avianna, Avicia, Avise, Avyce, Avys, and Avyse. Another English form is the spelling variant Avice. The German Aveza is a form of Avis that is used in foreign languages.

See also the related forms, the German Ava and the English Avila.

Avis is uncommon as a baby name for girls. At the modest height of its usage in 1912, 0.061% of baby girls were named Avis. It ranked at #238 then. The baby name has since fallen out of favor, and is used only on an infrequent scale now. Within the group of girl names directly related to Avis, Ava was the most popular in 2018. 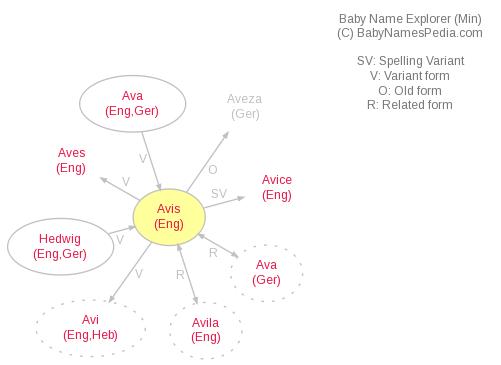