What does Axel mean?

[ 2 syll. a-xel, ax-el ] The baby boy name Axel is pronounced as AH-KS-eyL- †. Axel is an English, German, and Scandinavian name of Hebrew and Old Greek origin. Biblical name: The name was introduced by Scandinavian immigrants into the USA. It became popular, chiefly in the USA, due to the fame of the rock star Axl Rose (1962-).

In addition, Axel is a variant of the name Absalom (English and Hebrew) in the English, German, and Scandinavian languages.

Axel is also a variant of the name Alexander (Dutch, English, German, Hungarian, and Slavic) in the German language.

The name Axelle (French) is the female form of Axel.

Variant forms share the origin and meaning of Axel.

Acke (Scandinavian contraction) and Axl (English variant spelling) are other forms of Axel.

Axel is popular as a baby name for boys, and it is also viewed as trendy. The name's popularity has been growing since the 1980s. Its usage peaked modestly in 2018 with 0.210% of baby boys being given the name Axel. It ranked at #94 then. Among all boy names in its group, Axel was the 2nd most popular after Alexander in 2018. The name was thrice as popular as Axel in that year. 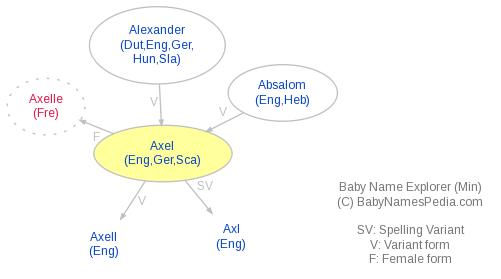