What does Ayla mean?

Ayla's origin is English, and its use, English and Turkish. The name was coined by Jean M. Auel for the heroine of his novel The Clan of the Cave Bear (1980). In the novel, Ayla is the result of the Neanderthals' atttempts to pronounce the Cro-Magnon heroine's real name, which is not stated by the author. The popularity of the name in the USA stems from its origin in literature.

Ayla has 15 derivatives that are used in English and foreign languages. English derivatives of the name include Ala, Aya, Ayala, Aylah, Aylana, Aylanna, Aylea, Aylee, Ayleen, Ayleena, Aylena, Aylene, and Aylie. Another English form is the spelling variant Aila. The Hebrew Aylin is a derivative of Ayla that is used in foreign languages.

Both the origin and meaning of the name Ayla is inherited by all variant forms.

Ayla is used predominantly in the German and Turkish languages. Its origin is Turkish. The meaning here is moonlight, halo.

Ayla is a derivative of the Hebrew Ayala.

Ayla is also a derivative of the Hebrew Elah.

Ayla is popular as a baby girl name, and it is also considered trendy. The name's popularity has been rising since the 1980s; before that, it was of infrequent use only. At the modest peak of its usage in 2018, 0.085% of baby girls were given the name Ayla. It was #189 in rank then. Out of all girl names in its family, Ayla was the most popular in 2018. Ayla was twice as popular as the next most popular name, Aylin, in that year. 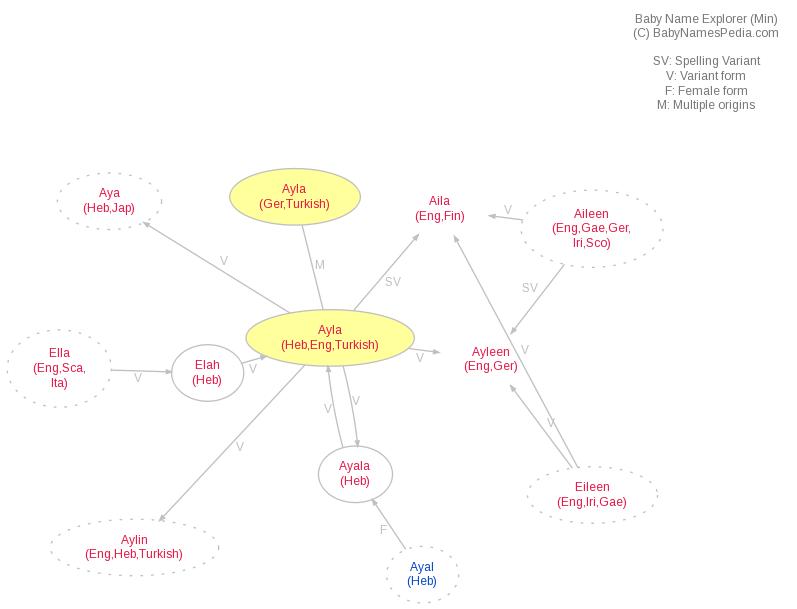