What does Azariah mean?

[ 4 syll. a-za-riah, az-ari-ah ] The baby boy name Azariah is pronounced aeZ-ah-RAY-ah (English) †. Azariah has its origins in the Hebrew language and it is used largely in English. The name Azariah means 'Yahweh has helped'. It is a biblical name derived from azar which means 'to help' ; el 'God, powerful'. Azarel (Hebrew) is an old form of the name. The name was borne by several persons in the Bible, including a companion of Daniel who was known by his Babylonian name Abednego, as well as a king of Judah known as Azaria. The name was adopted by English speakers in the 17th century.

In addition, Azariah is a variation of Ezra (English, French, German, Hebrew, and Spanish).

Azariah is somewhat popular as a baby boy name. The name's popularity has been rising since the 2010s; before that, it was of only very light use. At the modest peak of its usage in 2015, 0.018% of baby boys were named Azariah. It had a ranking of #699 then. In 2018, it ranked at #758 with a usage of 0.016%. Out of the family of boy names directly related to Azariah, Ezra was the most regularly used. It was more regularly used than Azariah by 20 times in 2018. Azariah has also been used as a baby girl name. 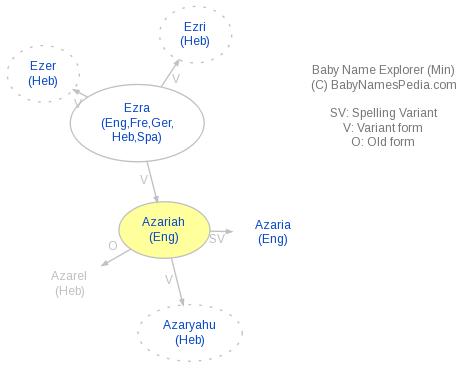