What does Babette mean?

[ 2 syll. ba-bet-te, bab-e-tte ] The baby girl name Babette is pronounced as Baa-BEHT †. Babette is used chiefly in the French, English, and German languages. Its origin is Hebrew and Latin. Biblical name: The name developed as a diminutive of Elizabeth and Barbara. It was in recent times popularized by the Danish film Babette's Feast (1987), which was based on a Karen Blixen story.

Babette is a familiar form of Barbara in the English, French, and German languages.

Babette is also a familiar form of the name Elizabeth (English, Greek, and Hebrew) in the English and French languages.

Variant forms share both the origin and meaning of Babette.

Babette is an uncommon baby girl name. At the modest height of its usage in 1961, 0.009% of baby girls were given the name Babette. It was #785 in rank then. The baby name has seen a loss in popularity since then, and is today of very light use. In 2018, within the family of girl names directly linked to Babette, Elizabeth was the most popular. 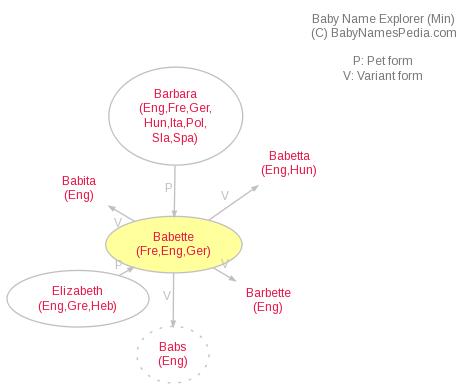