What does Bailey mean?

[ 2 syll. bai-ley, ba-il-ey ] The baby boy name Bailey is also used as a girl name, with the latter form being much more common. It is pronounced as BEY-Liy- †. Bailey is largely used in the English and German languages, and its origin is Old English. The name's meaning is bailiff; berry wood. It is from the elements 'baili' meaning bailiff ; 'baiulus' porter, messenger ; 'beg' berry ; 'leah' wood, clearing, meadow. The personal name is derived from an Old English family name which was originally given to someone working as a bailiff or porter; the job title is itself of Latin roots. The surname could also have originated as a byname for someone who lived in or near a bailey or fortress, or else Bailey in Lancashire, an English place name of the elements 'beg' and 'leah' (meaning wood, clearing, meadow). This was a regular boy name in the 19th century, but it was later popularized as a girl name by the female character Bailey Quarters in the American comedy television sitcom 'WKRP in Cincinnati' (1978-1982). The boy name was recently popularized by the male character Bailey Salinger in the American television drama series 'Party of Five' (1994-2000).

Bailey is an unusual baby name for boys. Its usage peaked modestly in 1997 with 0.115% of baby boys being given the name Bailey. It ranked at #150 then. The baby name has since experienced a steep fall in popularity, and is now of sporadic use. Among all boy names in its group, Bailey was nonetheless the most regularly used in 2018. Though Bailey is more popular as a girl name today, there was a period before 1937 that it was given more often to boys. From 1983 on, increasingly more girls than boys were named Bailey. In 2010, the name Bailey was given to 19 times as many girls than boys. 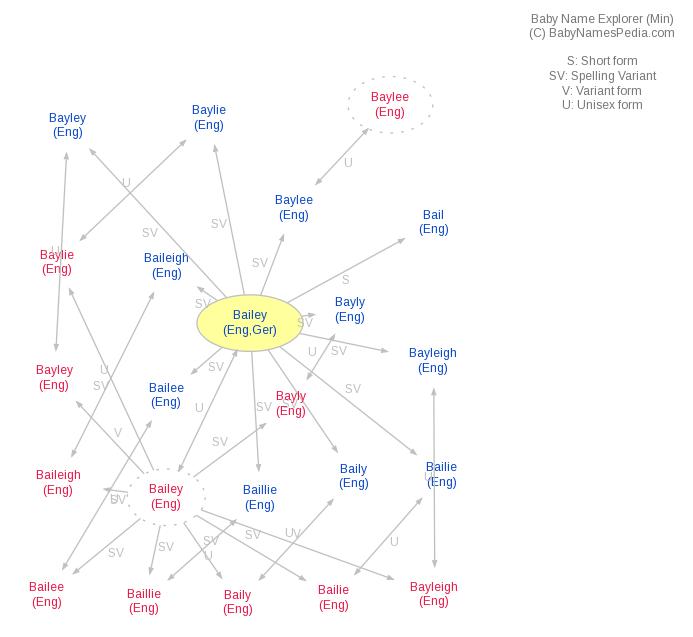