What does Barbie mean?

[ 2 syll. bar-bie, ba-rb-ie ] The baby girl name Barbie is pronounced as BAARBiy- †. Barbie is used mostly in English and Latin. It is of Latin origin. The name is universally associated with the Barbie fashion doll (1959-) manufactured by the American company Mattel, which was supposedly inspired by a German doll named Bild Lilli.

In addition, Barbie is a diminutive (English and Latin) of Barbara.

The names Barbea, Barbee, Barbey, Barby, and Baubie are derivatives of Barbie.

The origin and meaning of the name Barbie is inherited by all variant forms.

Barbie is rare as a baby girl name. At the modest peak of its usage in 1964, 0.010% of baby girls were named Barbie. It had a ranking of #756 then. The baby name has experienced a decline in frequency since then, and is currently used on a very light scale. Out of the family of girl names directly related to Barbie, Barbara was the most commonly used in 2018. 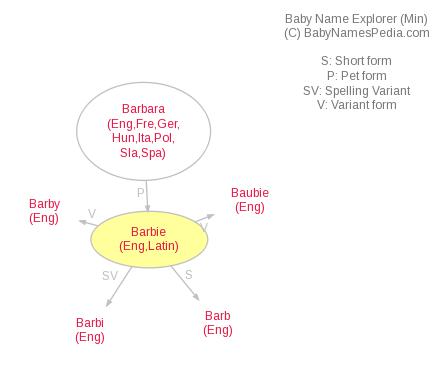