What does Barclay mean?

[ 2 syll. bar-clay, ba-rcl-ay ] The baby boy name Barclay is pronounced BAARKLey- †. Barclay's language of origin is Old English, and it is predominantly used in English, Irish, and Scottish. Barclay is of the meaning 'birch tree clearing'. It is from beorc which means 'birch tree' ; leah 'wood, clearing, meadow'. The first name is derived from the Scottish surname Berchelai or Berchelei. The former is from the English place name Berkeley in Gloucestershire, and the latter from Berkley in Somerset. Both place names are of the Old English 'beroc' and leah (meaning 'wood, clearing, meadow'). The surname was brought to Scotland by Walter de Berchelai, who became Chamberlain of Scotland in 1165. Clan Barclay, one of the most influential families in Scotland, was descended from him. The Barclays bank was associated with the surname after James Barclay, the son-in-law of one of the founders, became a partner in the bank in 1736. In Ireland, the name is used as an Anglicized form of Parthalán.

Barclay is a form of the English Berkeley.

Barclay is not widely used as a baby name for boys. It is not in the top 1000 names. 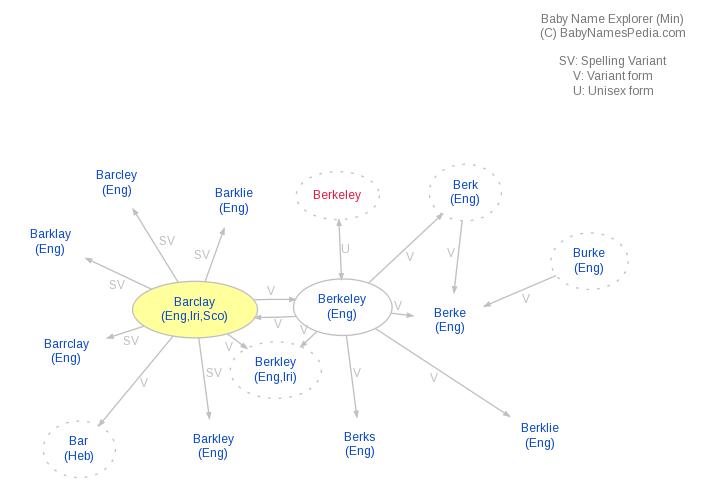