What does Barnabas mean?

[ 3 syll. bar-na-bas, ba-rnab-as ] The baby boy name Barnabas is pronounced BAAR-Nah-BahS in English †. Barnabas' language of origin is Aramaic. It is predominantly used in the English and German languages. The name means 'son of consolation, son of exhortation, son of the prophet'. It is a biblical name derived from bar meaning 'son' ; naba 'to speak prophetically'. An older form of Barnabas is Barnebhuah (Aramaic). Barnabas is a Greek form of an Aramaic name, which has its meaning recorded in the Bible as 'son of consolation'. In the Bible, Barnabas was the surname given to one of Paul's faithful companions. The first name was adopted by English speakers from the 12th century; the pet form Barnaby was also first used in the Middle Ages, and it was later made known as the name of the innocent messenger and titular character in the Dickens novel Barnaby Rudge (1841). The form Barney is in recent times best known as the name of the purple dancing and singing dinosaur which was created in 1987, and later made famous in the popular children's television show Barney & Friends (1992-) produced in America.

The name Barnabas is widely used; it has 29 variant forms that are used in English and foreign languages. Variant forms of the name used in English include Barn, Barnabea, Barnabee, Barnabey, Barnabé (also used in French), Barnabie, Barnebi, Barni, Barnibus, Barno, Bernaba, Bernabi, and Burnaby. Other English forms include the diminutives Barnaby, Barney, Barnie, and Barny, and the variant spellings Barnebas (also used in Spanish) and Barnebus.

Barnabas is not regularly used as a baby boy name. It is not ranked within the top 1000.

Baby names that sound like Barnabas include Barnibus, Barnabea, and Barnabás (Hungarian). 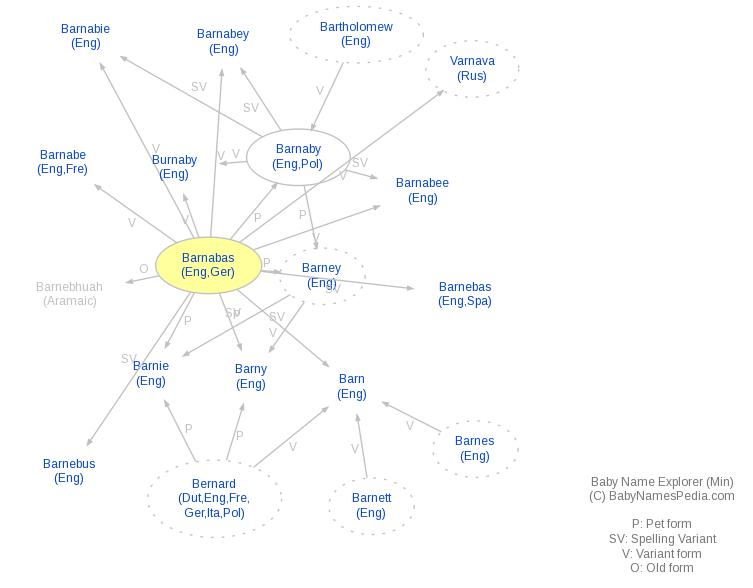