What does Barney mean?

[ 2 syll. bar-ney, ba-rn-ey ] The baby boy name Barney is pronounced as BAARNiy- †. Barney is of Aramaic, Old English, and Germanic origin, and it is used mainly in the English language.

In addition, Barney is an English pet form of the English and German Barnabas.

Barney is also an English pet form of the English and Polish Barnaby.

Barney is also a form of the English Barnett.

Forms of Barney include the names Barnea, Barnee, Barner, Barni, and Barno.

Variant forms inherit the origin and meaning of the name Barney.

Other forms of Barney include the variant spellings Barnie (English) and Barny (English).

Barney is unusual as a baby name for boys. In 1900, 0.051% of baby boys were given the name Barney. Its ranking then was #216. The baby name has since markedly declined in popularity, and is used only on an infrequent scale now. Among all boy names in its group, Barney was nonetheless the most popular in 2018. 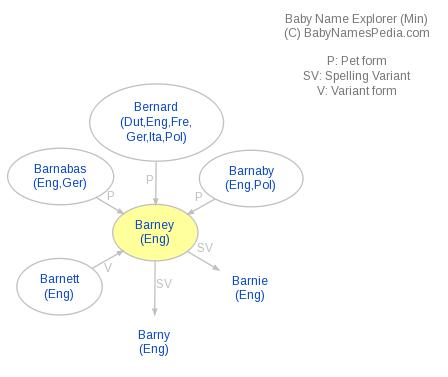