What does Barry mean?

[ 2 syll. bar-ry, ba-rry ] The baby boy name Barry is pronounced as BEHR-iy- †. Barry is used chiefly in the English and Irish languages, and it is derived from Celtic and Germanic origins. From Celtic roots, its meaning is fair headed; spear; mound,dune; son of Harry. The name is of multiple origins. In Ireland, it could be an Anglicized form of the Irish name Bairre, which is derived from Fionnbarr, and of the elements 'fionn' (meaning white, fair) and 'barr', or else it could be from the Irish Gaelic 'bearach'. In Wales, it could be from the place name of Barry Island, itself of the Welsh 'bar' (mound, dune), or else it could be from the surname 'ap Harry'. The name was first adopted by English speakers in the 19th century, popularized by the Thackeray novel Barry Lyndon (1844). It saw a boost in popularity among English speakers in the 20th century, especially in Australia.

In addition, Barry is a variant of the name Bernard (Dutch, English, French, German, Italian, and Polish) in the English language.

The name Barrie (English) is the female form of Barry.

Barry is uncommon as a baby name for boys. At the height of its usage in 1962, 0.313% of baby boys were given the name Barry. It ranked at #61 then. The baby name has since dropped out of favor, and is today of very modest use. Within all boy names in its group, Barry was nonetheless the most regularly used in 2018. 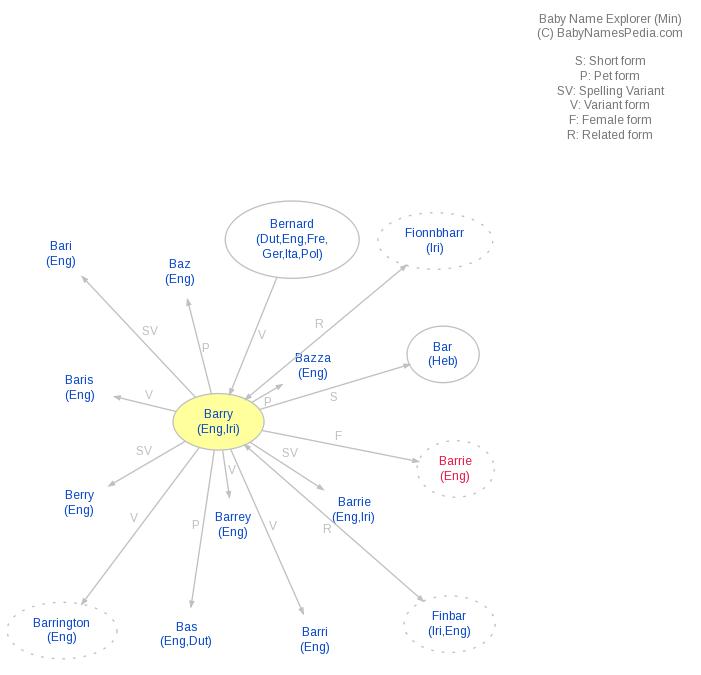