What does Bart mean?

[ 1 syll. bar(t), ba-rt ] The baby boy name Bart is pronounced BaaRT †. Bart is of Aramaic, Old English, and Germanic origin, and it is used mainly in Dutch, Hebrew, and English. The name is associated with the mischievous and rebellious boy Bart Simpson in the American cartoon TV series The Simpsons (1989-); his full first name is Bartholomew.

Bart is a Dutch and English shortening of the English Bartholomew.

Bart is also a shortening of the English Barton.

Bart is also a Dutch diminutive form of the Dutch, English, and German Bertram.

Forms of Bart include the names Barte, Bartel, Barth, Bartie, and Barty.

Variant forms inherit both the origin and meaning of the name Bart.

Another form of the name is the English spelling variant Bartt.

Bart is uncommon as a baby name for boys. At the modest height of its usage in 1959, 0.047% of baby boys were named Bart. It ranked at #249 then. The baby name has since fallen out of favor, and is used only on an infrequent scale now. Within all boy names in its group, Bart was nevertheless the most widely used in 2018. 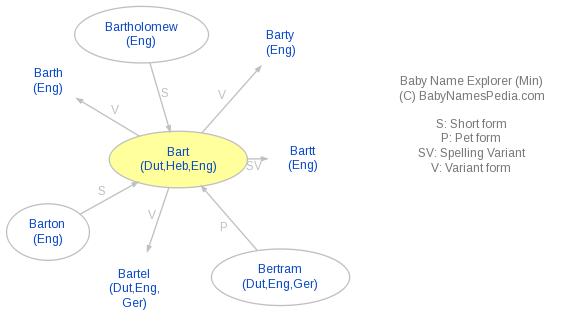