What does Bartholomew mean?

[ 4 syll. bar-(t)ho-lo-mew, ba-rtholom-ew ] The baby boy name Bartholomew is pronounced in English as BaaR-THAAL-ah-MYuw †. Bartholomew is of Aramaic origin and it is used mainly in English. Bartholomew's meaning is 'son of Talmai, son of the one who abounds in furrows'. Bar Talmai (Aramaic), Bartholomaeus (Latin), and Bartholomaios (Old Greek) are original forms of the name. The first element could be bard or bercht (meaning 'shining, clear'), but as the ultimate Aramaic name is most likely Bar Talmai, the first element is likely to be the Aramaic bar. Talmai is a variant of Tolmai, meaning 'abounding in furrows'.

Bartholomew was one of the apostles, mentioned in various gospels of the New Testament of the Bible; some believe that it was the nickname for the apostle Nathaniel. The name was first adopted by English speakers in the medieval period. More than 100 churches in England were dedicated to the saint then. In the 12th century, King Henry I's courtier Rahere founded St Bartholomew's Hospital after having a vision of the saint, and brought widespread attention to the name. The Irish name Partholón and its other variant spellings are sometimes taken as a form of Bartholomew; it was borne in Irish mythology by the first man to arrive in Ireland after the biblical flood.

What are the Variant Forms of Bartholomew?

Bartholomew is unusual as a baby name for boys. Its usage peaked modestly in 1903 with 0.007% of baby boys being named Bartholomew. It ranked at #788 then. The baby name has since experienced a drop in popularity, and is currently of only sporadic use. Among all boy names in its group, Bartholomew was nevertheless the most widely used in 2018.

Baby names that sound like Bartholomew include Barthelemy (French and Scandinavian), Barthlomeo (English), and Bertalan (Hungarian). 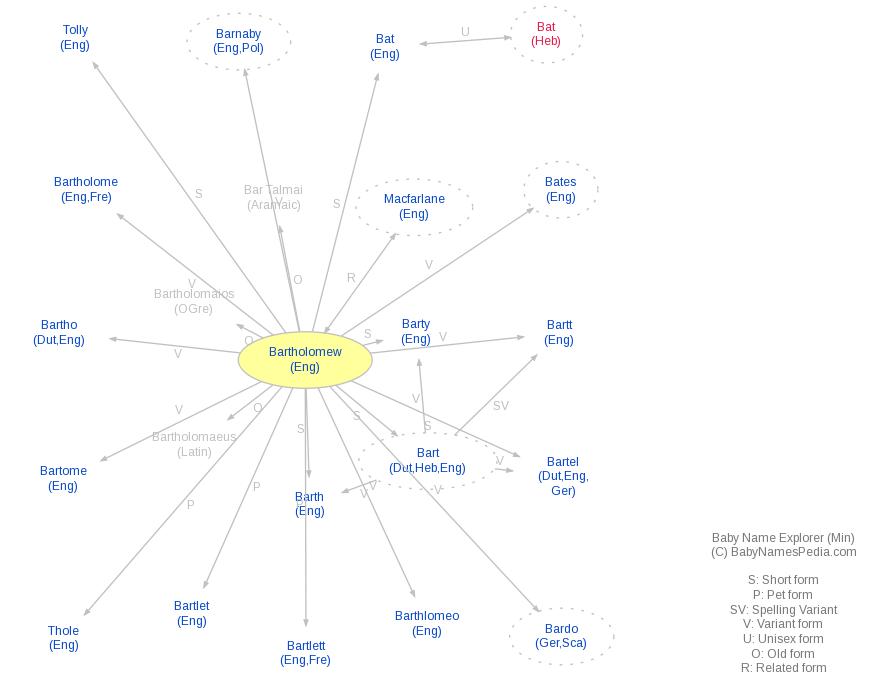