What does Benedict mean?

[ 3 syll. be-ne-dic(t), ben-edi-ct ] The baby boy name Benedict is pronounced as BEHN-eh-DihKT †. Benedict is an English name of Latin origin. A biblical name, it is derived from the element 'benedictus' meaning blessed. Benedictus (Latin) is an old form of Benedict.

The name was borne by the 6th-century Saint Benedict (480-550), the founder of Christian monastic communities and the Benedictine order. The name was first adopted by English speakers in the 12th century, and it was a popular Roman Catholic name. Common medieval forms of the name included Benedick and Bennett; the latter was popular enough to be used as a surname, which in turn led to a revival in its use as a modern given name. The Czech form Benes has given rise to the name Beynish, which is also used as a translation of Baruch. In the 18th century, the popularity of the name in the US declined somewhat through its association with Benedict Arnold (1741-1801), the Revolutionary soldier who plotted unsuccessfully to surrender his American fort to the British. The name has also been borne by at least sixteen popes. In literature, the form Benedick appeared in the Shakespeare comedy play Much Ado about Nothing (1598-1599). The name Benedicta (English and German) is the female version of Benedict.

What are the Variant Forms of Benedict?

Benedict is a widely used name; it has 68 variants that are used in English and other languages. Variants used in English include Bendick, Bendict, Bendix, Bendrick, Bendyk, Benedick, Benedictos, Benedictus, Benedik (used in Hungarian as well), Benediktas, Benedit, Benet (used in Catalan as well), Benett, Benicio, Benn, Bennedict, Bennedikt, Bennet, Bennett, Bennito, Bennt, Benoît (used in French as well), Dick, and Venedict (used in Russian as well). The short form Ben (used in Dutch and as well), and the pet forms Bennie and Benny are other English variants.

Benedict is a classic favorite. Today it is still somewhat popular as a baby name for boys, though to a lesser extent than it was before. At the modest peak of its usage in 1914, 0.017% of baby boys were given the name Benedict. Its ranking then was #446. The baby name has since markedly fallen in popularity, and it is used on an infrequent scale in recent years. In 2018, its usage was only 0.011% and its ranking #981. Out of the group of boy names directly linked to Benedict, Bennett was the most regularly used. In 2018, its use outnumbered Benedict's by 16 times. 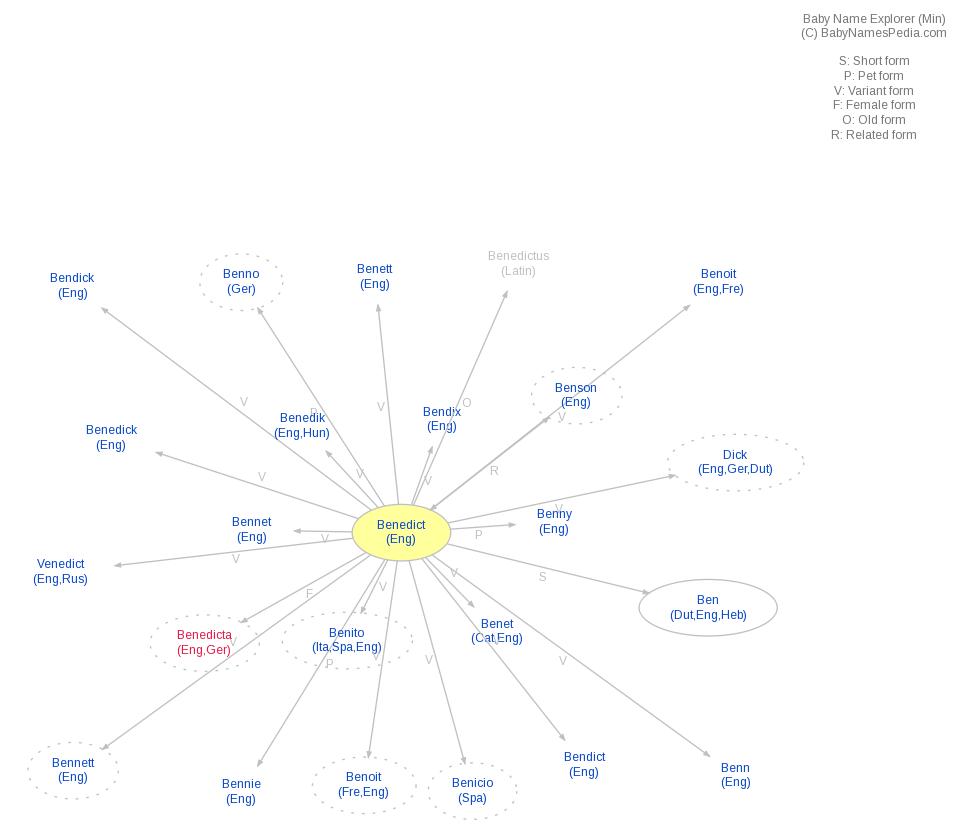