What does Benjamin mean?

[ 3 syll. be-nja-min, ben-jam-in ] The baby boy name Benjamin is pronounced as BEHN-JHah-MihN in English, BehN-ZHae-MEHN in French, or BEHN-Yaa-MiyN in German †. Benjamin is largely used in the English, French, German, and Hebrew languages. Its origin is Hebrew. The meaning of the name is son of the south, son of the right hand, son of my old age, favorite. Benyamin (Hebrew) is an older form of Benjamin.

In the Bible, Benjamin was the youngest son of Jacob and Rachel, who went on to found one of the twelve tribes of Israel under his name. He was originally named Benoni meaning 'son of my sorrow' by his mother who died after childbirth. His father later renamed him Benyamin, which is of the first element 'ben' with the second element 'yamin' or 'yamim'. With 'yamin', it is most likely that the meaning of the name is 'son of the south' in reference to the fact that Benjamin was Jacob's only son born in the southern Canaan instead of the northern Mesopotamia, or else it could mean 'son of my right hand' to indicate good luck and strength. With 'yamim', the name has often been interpreted as 'son of my old age', as 'yamim' can be taken to mean 'years', in reference to the fact that Benjamin was Jacob's youngest child, born to him and his wife in their old age. Another tradition is to take the meaning as 'favorite', as Benjamin was the pet of his father and elder siblings.

In the Middle Ages, the name was often given to babies whose mothers had died in the childbirth like the biblical Rachel. The grim associations of the name were soon shed, and in the 17th century, the Puritans took to the name with renewed interest. It was then often given to the youngest child of elderly parents, or to a favorite son. It has also been commonly used by Jews, and in Scotland, it is sometimes taken as the Anglicized form of the Gaelic Beathan. In recent times, Benjamin has appeared as the name of the central character portrayed by Dustin Hoffman in the popular film The Graduate (1967), contributing to a boost in its popularity.

The name Benjamin is used to a great extent; it has 52 variant transcriptions that are used in English and other languages. Variation transcriptions of Benjamin used in English include Banjamin, Bannerjee, Bejamin, Benejamen, Bengamin, Benhy, Beni, Benja, Benjahmin, Benjaim, Benjam, Benjamain, Benjamine, Benjamyn, Benjee, Benjemin, Benjey, Benkamin, Benyamin, Benyamino, Binyamino, Venjamin, and Yamin. Other English forms include the short forms Ben (used in Dutch and Hebrew too) and Benj, the familiar forms Benji, Benjie, Benjy (used in German too), Bennie, Benny, and Jamin, and the variant spellings Benjaman, Benjamen, Benjamon, Benjiman, and Benjimen.

Benjamin is very popular as a baby boy name, and it is also considered trendy. The name's popularity rose from the 1940s up to the 1980s. At the height of its usage in 1981, 0.771% of baby boys were given the name Benjamin. It was #32 in rank then. The baby name has seen a fall in popularity since then. In 2018, its usage was 0.694% and its ranking #6, but it was nonetheless the most popular within all boy names in its family. In 2018, Benjamin was used 39 times more than the subsequent ranked name, Ben. 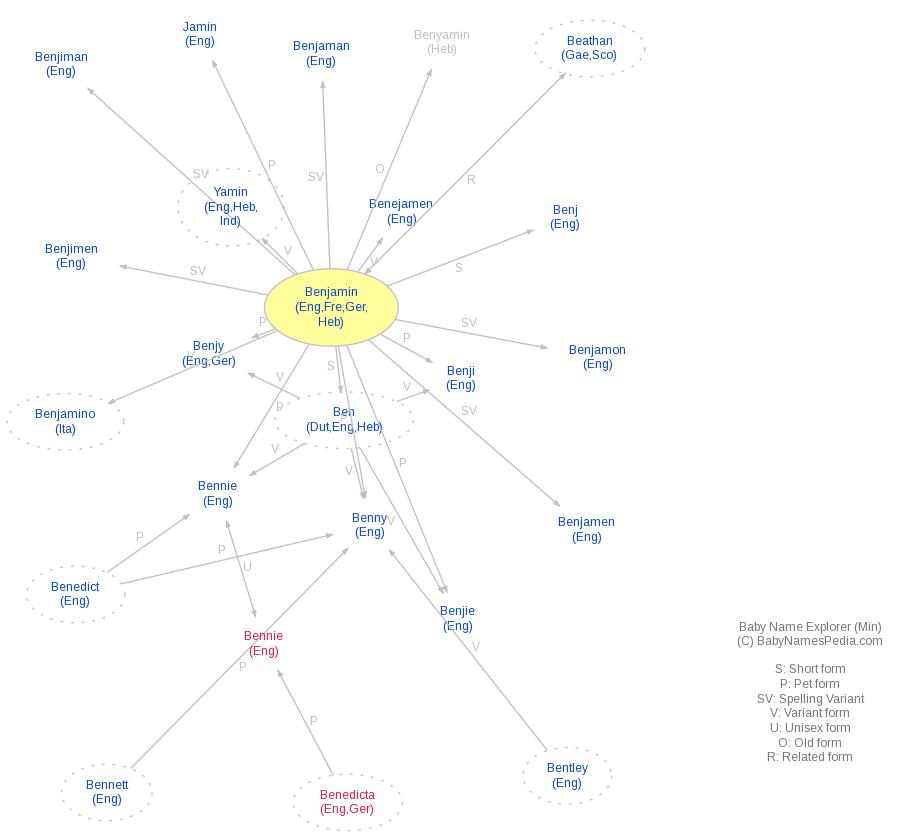