What does Bennett mean?

[ 2 syll. ben-net(t), be-nne-tt ] The baby boy name Bennett is sometimes used as a girl name. Its pronunciation is BEHN-ehT †. Bennett is used predominantly in the English language and its origin is Latin. This was a usual medieval form of Benedict. It was later also used as a surname. The first name today usually represents a transferred use of the surname, although the medieval given name has also been directly revived.

Bennett is a variant of the name Benedict (English).

Benette, Benit, Bennete, Bennette, and Benyt are variants of Bennett.

Bennett is a popular baby name for boys, and it is also considered trendy. The name's popularity has been increasing since the 1970s. At the modest height of its usage in 2018, 0.170% of baby boys were given the name Bennett. It ranked at #120 then. Within all boy names in its group, Bennett was the most popular in 2018. 9 times more boys were named Bennett than the next most popular name, Ben, in that year. In the past century Bennett has mostly been a baby boy name. 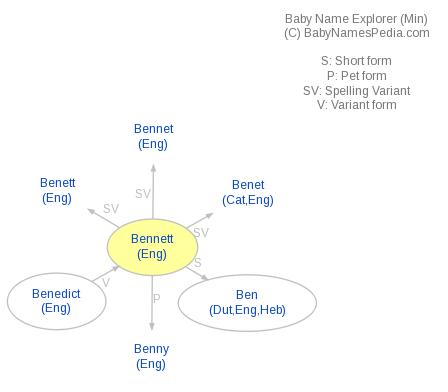