What does Benno mean?

[ 2 syll. ben-no, be-nno ] The baby boy name Benno is pronounced as BEHN-ow- †. Benno is mainly used in German, and its language of origin is Hebrew, Latin, and Germanic. Germanic origin, use: The name first developed in the Middle Ages as a diminutive of longer Germanic names starting with the element 'ber', such as Bernard. It later came into use as a short for Benedict. Saint Benno (1010-1106) was a bishop of Meissen in Germany and the patron saint of fishermen and weavers.

In addition, Benno is a variant form of the Dutch, English, and Hebrew name Ben.

Benno is also a pet form of the English name Benedict in the German language.

Benno is also a variant form of the Italian, Spanish, and English name Benito.

Benno is also a variant form of the Dutch, English, French, German, Italian, and Polish name Bernard in the German language.

The name Beno is a variant form of Benno.

Variant forms share both the origin and meaning of the name Benno.

Benno is not widely used as a baby name for boys. It is not in the top 1000 names. In 2018, within the group of boy names directly related to Benno, Ben was the most commonly used. 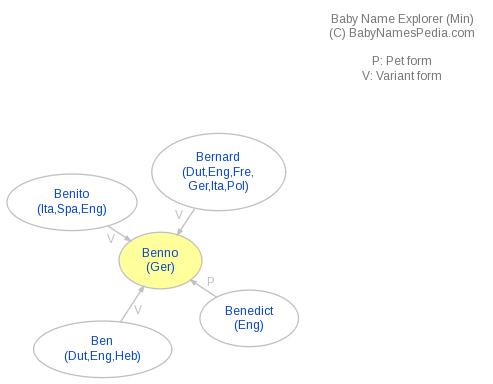