What does Berenice mean?

[ 4 syll. be-re-ni-ce, ber-en-ice ] The baby girl name Berenice is pronounced in English as BehR-ah-NAY-Siy or in Italian as Beh-Reh-NIY-CHeh †. Berenice has its origins in the Old Greek language, and it is used largely in English, French, German, and Italian. Berenice is of the meaning 'bearer of victory'. It is a biblical name derived from phero which means 'to bear, to carry' ; nike 'victory'. The name is from the ancient Macedonian form for Pherenike (Old Greek); it has the same origins as Veronica. The name was borne in the Bible by a sister of King Herod Agrippa II, and by a Christian mentioned in the Book of Acts. The name was also borne by Berenika (350 BC), priestess of Demetra in Lete. The Egyptian queen Berenice I brought the name into Egypt after she married Ptolemy I; her husband later named a Red Sea port after her. The name was later introduced into Europe and Asia, along with other aspects of Greek culture, by the conquests of Alexander the Great. It was later adopted by English Puritans in the 17th century. In literature, the name has been made known by the Jean Racine play Bérénice (1670).

Berenice is a derivative of the English and Greek Bernice.

Berenice is unusual as a baby name for girls. Its usage peaked modestly in 1995 with 0.017% of baby girls being named Berenice. Its ranking then was #655. The baby name has since dropped out of favor, and is currently of only sporadic use. In 2018, among the group of girl names directly related to Berenice, Veronica was the most regularly used. 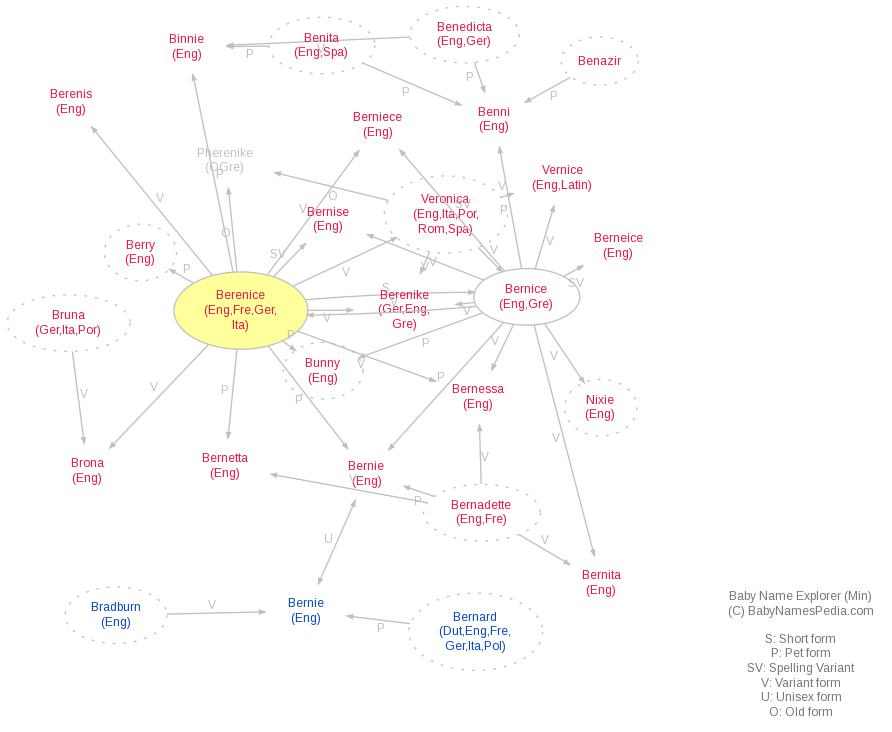