What does Bernadette mean?

[ 3 syll. ber-na-det-te, be-rnade-tte ] The baby girl name Bernadette is pronounced BehR-Naa-DEHT or Ber-Naa-DEHT †. Bernadette is of Germanic origin. It is used mainly in English and French. The name Bernadette means 'brave as a bear'. It is a two-element name derived from ber and hart with the meanings 'bear' and 'brave, hardy' respectively. The name has been used primarily by Roman Catholics, especially in Ireland and Britain. It is often bestowed in tribute to Saint Bernadette Soubirous (1844-1879), a peasant girl from the town of Lourdes who reported eighteen visions of the Virgin Mary; the discovery of the Lourdes healing spring is attributed to her. The name was adopted by English speakers from the 19th century. Bernadette is the feminine equivalent of the Dutch, English, French, German, Italian, and Polish Bernard.

Bernadette is a widely used name; it has 40 forms that are used in English and foreign languages. English forms of the name include Beradette, Bernadene, Bernadeta, Bernadete, Bernadin, Bernadina, Bernadine, Bernadita, Bernadotte, Bernaetta, Bernardina (used in Italian, Portuguese, and Spanish too), Bernessa, Bernetta, Bernette (used in French too), Berni, Bernita, and Berny. Other English forms include the shortenings Berna and Berneta, the diminutives Bera and Bernie, and the spelling variants Bernadet and Bernedette.

Bernadette is rare as a baby girl name. At the peak of its usage in 1946, 0.082% of baby girls were named Bernadette. It had a ranking of #188 then. The baby name has suffered a marked drop in frequency since then, and is used only on a very modest scale now. Out of all girl names in its family, Bernadette was nevertheless the most widely used in 2018. 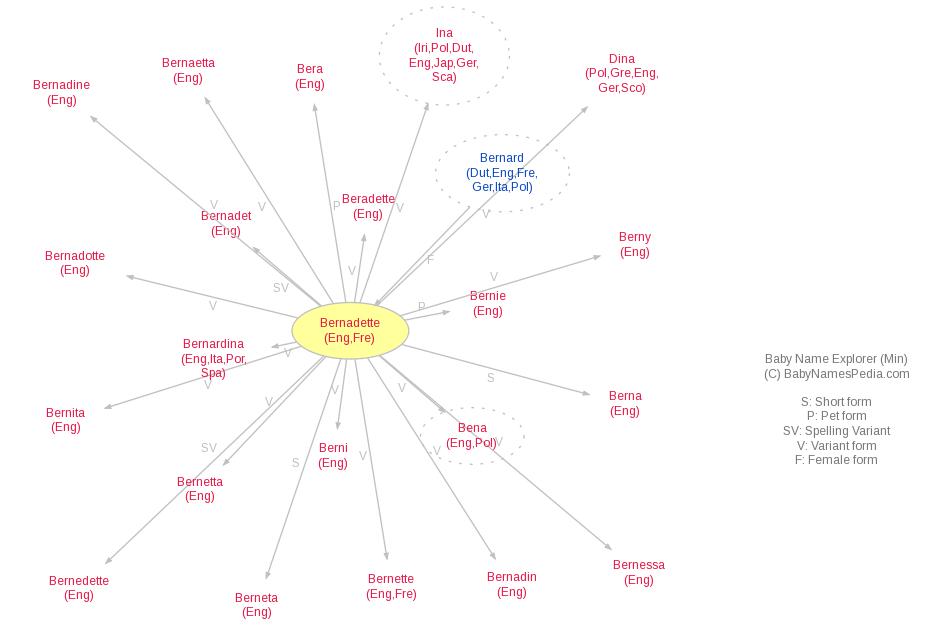