What does Bernard mean?

[ 2 syll. ber-nar(d), be-rna-rd ] The baby boy name Bernard is pronounced as BAHR-NahRD or BahR-NAARD in English, BehR-NAER in French, or BEHR-NaaRT in Polish †. Bernard is used chiefly in the Dutch, English, French, German, Italian, and Polish languages, and it is derived from Germanic origins. The name is of the meaning brave as a bear. A two-element name, it is from the elements 'ber' meaning bear ; 'hart' brave, hardy. Beornheard (Germanic) and Berinhard (Germanic) are older forms of Bernard. The name could also be from the Old English Beornheard, itself from the Old English words 'beorn' which means 'man' or 'warrior', and 'heard' which means 'brave'. However, it was the Norman name, derived via French from Germanic origins, that was widely used as an English given name after the Norman Conquest, replacing the Old English cognate and appearing several times in the Domesday Book.

The name was borne by Saint Bernard of Menthon (923-1008) of the Benedictine order, who founded monasteries and hospices in the Alpine passes that were eventually named after him. His work in the passes also led to him being known as the patron saint of mountaineers in Catholic custom; the name was also given to the Saint Bernard dog used in mountain rescue work. Other well-known medieval churchmen include Saint Bernard of Clairvaux (1090-1153), Doctor of the Church, and Bernard of Chartres (-1124), a French Neo-Platonist philosopher. The name fell out of favour in the 17th century, and was later revived by the Victorians. The name Bernadette (English and French) is the female form of Bernard.

What are the Variant Forms of Bernard?

The name Bernard is used to a great extent; it has 66 variants that are used in English and other languages. Variants used in English include Barn, Barnardo, Barnhard, Barnhardo, Barrett, Barry, Benard, Ber, Bernad, Bernadas, Bernaden, Bernadin, Bernadyn, Bernardo (used in Italian, Portuguese, and Spanish too), Bernardus, Bernarr, Bernel, Bernerd, Bernhard (used in German too), Bernhardo, Bernhart, Bernis, Berny, Burnie, Burny, Nard, and Vernard. Other English forms include the short form Bern (used in German too), the pet forms Barney, Barnie, Barny, Bear, and Bernie, and the variant spellings Barnard (used in French, and Polish too) and Burnard.

Bernard is uncommon as a baby name for boys. At the modest height of its usage in 1921, 0.394% of baby boys were given the name Bernard. Its ranking then was #45. The baby name has since experienced a substantial fall in popularity, and is today of irregular use. In 2018, within the group of boy names directly linked to Bernard, Barrett was the most popular. 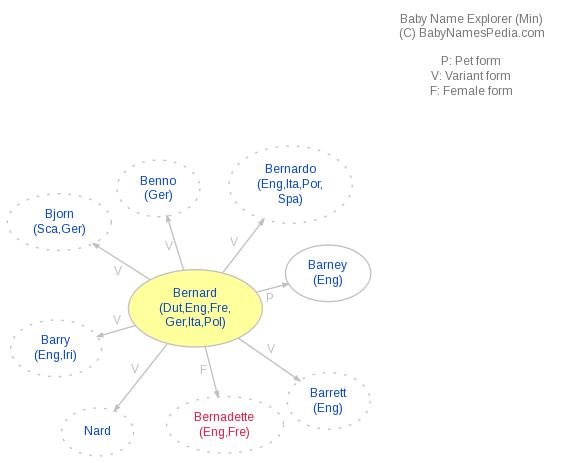