What does Bertha mean?

[ 2 syll. ber-(t)ha, be-r-tha ] The baby girl name Bertha is pronounced in English as BAHR-THah or in German as BEHR-Taa †. Bertha has its origins in the Germanic language. It is used largely in English, French, and Spanish. Original forms of the name include Berahta (Germanic), Berchta (Germanic), and Perchta (Germanic). The name could have originated as the short form of other Germanic names starting with the element berht (meaning 'bright, famous'). In Southern Germanic mythology, it was borne by Perchta or Berchta, a goddess and guardian of the beasts. The name was popularized in medieval times by Bertha Bigfoot, the beautiful mother of the emperor Charlemagne, who appeared as a romantic heroine in medieval romantic tales. The name was later introduced by the Normans into England, but its use died out by the end of the Middle Ages. It saw revival in the 19th century, due to a re-introduction from Germany. In World War I, a German howitzer was nicknamed Big Bertha, after Frau Bertha Krupp, the wife of the head of the Krupp armaments firm. In literature, the name is borne by Rochester's mad first wife in Charlotte Bronte's novel Jane Eyre (1847).

In addition, Bertha is a Spanish form of the English, German, and Italian Roberta.

Bertha is the feminine equivalent of the Dutch, English, German, Polish, and Scandinavian Bert.

Bertha is unusual as a baby girl name. In 1900, 0.949% of baby girls were named Bertha. It had a ranking of #16 then. The baby name has dropped out of favor since then, and is of only sporadic use now. Among all girl names in its family, Bertha was nevertheless the most commonly used in 2018. The name Bertha has mainly been a baby girl name, although it has also been given to boys in the last century. There were 102 times more baby girls than boys who were named Bertha in 1910. 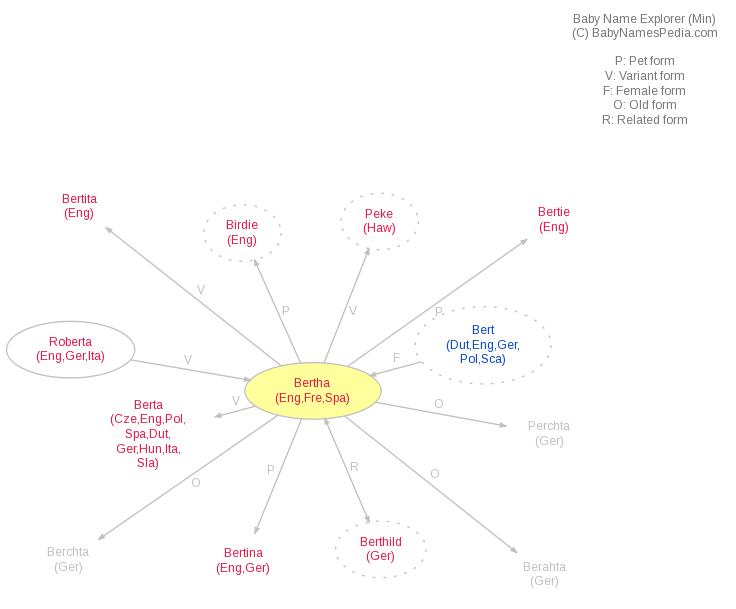