What does Berthold mean?

[ 2 syll. ber-(t)hol(d), be-rtho-ld ] The baby boy name Berthold is pronounced as B-ERTowLD †. Berthold is primarily used in the English, French, and German languages. It is of Germanic origin. The meaning of the name is bright ruler. The first name is from the Old German 'berht' (meaning bright, famous) and 'wald', with the second element being altered through association with the German 'hold' (fair, lovely, graceful).

Berthold has 16 forms that are used in English and other languages. Forms of Berthold used in English include Bertel, Bertell, Berthoud, Bertill, Bertol, Bertolde, Bertoll, Bertyl, and Bertyll. The contraction Bert (used in Dutch and German too) is another English form.

Berthold is an unusual baby boy name. It is ranked outside of the top 1000. 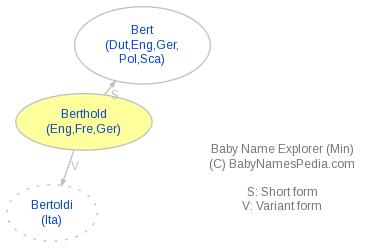