What does Bertram mean?

[ 2 syll. ber-tram, be-rtr-am ] The baby boy name Bertram is pronounced as BAHR-TRahM in English †. Bertram is used chiefly in the Dutch, English, and German languages, and its origin is Germanic. The name's meaning is bright raven, wise person. It is derived from the elements 'berht' meaning bright, famous ; 'hramn' raven. Berahthraban (Germanic) is an older form of Bertram. The 'raven' in the name is symbolic of wisdom in Germanic mythology. Odin, the chief god in Norse paganism, was often depicted with ravens called Hugin and Munin. The name was introduced to English speakers during the Norman Conquest, and was fairly popular in the Middle Ages. The name was in medieval times taken as the original form of the French Bertrand. In literature, it has appeared as the name of the Count of Roussillon in Shakespeare's play All's Well That Ends Well (1603-1604). The name saw a revival in the 19th century.

Bertram has 19 variants that are used in English and other languages. Variants used in English include Bartram, Beltran, Beltrano, Berton, Bertramus, Bertran, Bertrand (also used in French and German), Bertrando, Bertranno, and Bertron. The short form Bert (also used in Dutch and German), the diminutive form Bertie, and the variant spellings Bertrem and Bertrum are other English forms.

Bertram is uncommon as a baby name for boys. At the height of its usage in 1911, 0.022% of baby boys were given the name Bertram. It ranked at #394 then. The baby name has since dropped out of favor, and is today of very modest use. Within all boy names in its group, Bertram was nonetheless the most popular in 2018. 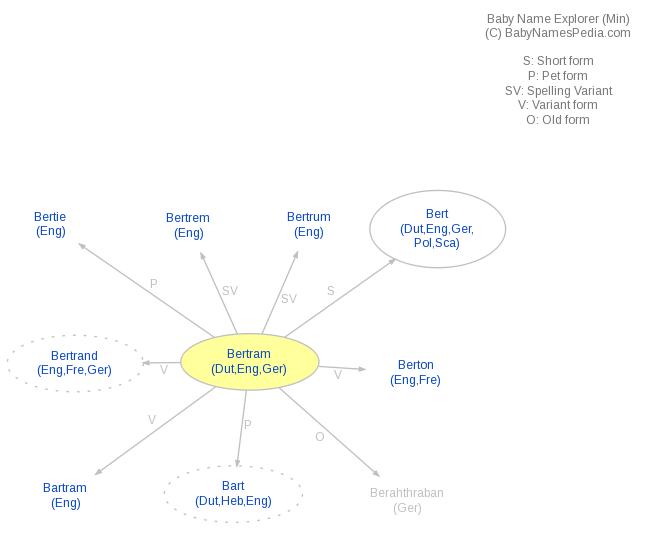