What does Bess mean?

[ syll. bes(s), be-ss ] The baby girl name Bess is pronounced B-S- †. Bess' language of origin is Hebrew, and it is predominantly used in the English and Hebrew languages. The name was first made known by Queen Elizabeth I (1533-1603), who was sometimes called Good Queen Bess. It was also known from Elizabeth Talbot (1527-1608), the Countess of Shrewsbury who was also called Bess of Hardwick. In literature, it has appeared as the name of the heroine in the George Gershwin opera Porgy and Bess (1935).

Bess is a contraction of Elizabeth (English, Greek, and Hebrew) in the English and Hebrew languages.

Variant forms share both the origin and meaning of Bess.

Other variants of Bess include the diminutive forms Bessie (English) and Bessy (English).

Bess is an uncommon baby name for girls. At the modest height of its usage in 1901, 0.042% of baby girls were given the name Bess. It ranked at #290 then. The baby name has since steeply declined in popularity, and is of only very light use today. In 2018, within the group of girl names directly linked to Bess, Elizabeth was the most frequently used. 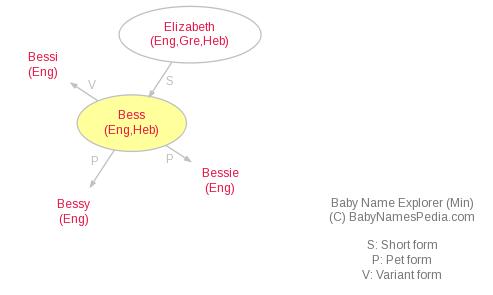