What does Bessie mean?

[ 1 syll. bes-sie, be-ss-ie ] The baby girl name Bessie is pronounced B-S-iy- †. Bessie is of Hebrew origin and it is predominantly used in the English language.

Bessie is a diminutive (English) of the English and Hebrew Bess.

Bessie is also a diminutive (English) of the English and Hebrew Beth.

Bessie is also a diminutive (English) of the English, Greek, and Hebrew Elizabeth.

Bessie is a rare baby girl name. In 1900, 0.957% of baby girls were given the name Bessie. It had a ranking of #15 then. The baby name has fallen from favor since then, and is currently used only on a very light scale. In 2018, out of the family of girl names directly linked to Bessie, Elizabeth was the most commonly used. The name Bessie has been mainly given to girls, although it has also been used as a boy name in the last century. There were 98 times more girls than boys who were named Bessie in 1910. 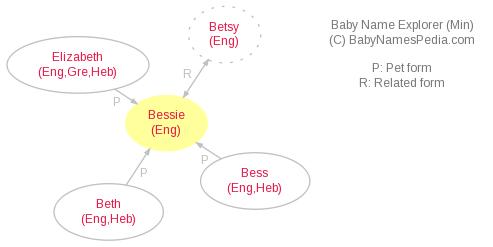