What does Bethany mean?

[ 3 syll. bet-ha-ny, be-th-any ] The baby girl name Bethany is pronounced in English as BEH-TH-ah-Niy †. Bethany's language of origin is Hebrew and it is predominantly used in English. The meaning of Bethany is 'house of figs'. It is a biblical name derived from beth which means 'house' ; te'ena 'fig, fig tree'. In the Bible, Bethany was a city outside Jerusalem where Jesus stayed before the crucifixion. It has been a popular Roman Catholic name, often bestowed in honor of Mary of Bethany, the sister of Martha and Lazarus who welcomed Jesus into her house.

In addition, Bethany is a familiar form of Bethan (Welsh and English) in the English language.

Bethany is a rather popular baby girl name. The name's popularity increased from the 1940s up to the 1980s; before that, it was of only irregular use. Its usage peaked modestly in 1987 with 0.176% of baby girls being named Bethany. It was #87 in rank then. The baby name has experienced a decline in popularity since then. In 2018, it ranked at #481 with a usage of 0.035%, but it was nevertheless the most popular among all girl names in its family. 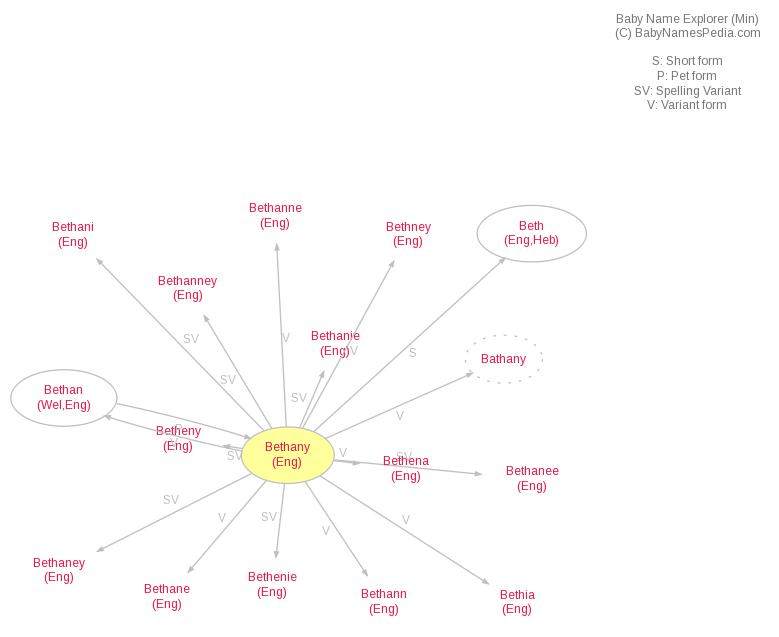