What does Betsy mean?

[ 2 syll. bet-sy, be-tsy ] The baby girl name Betsy is pronounced as BEHTSiy- †. Betsy is largely used in the English language and its origin is Hebrew. The name evolved as a diminutive of Elizabeth, possibly as a blend of Betty and Bessie. Another form has been used in the Charles Dickens novel David Copperfield (1850) as the name of the eccentric Aunt Betsey.

Betsy is a variant transcription of the name Betty (Dutch and English).

Betsy is also an English familiar form of the name Elizabeth (English, Greek, and Hebrew).

Variant forms inherit the origin and meaning of Betsy.

Betts (familiar form in ) and Bets (contraction in ) are other variants of Betsy.

Betsy is unusual as a baby girl name. Its usage peaked in 1959 with 0.067% of baby girls being given the name Betsy. It was #228 in rank then. The baby name has fallen out of favor since then, and is now of very modest use. Among the family of girl names directly linked to Betsy, Elizabeth was the most commonly used in 2018. 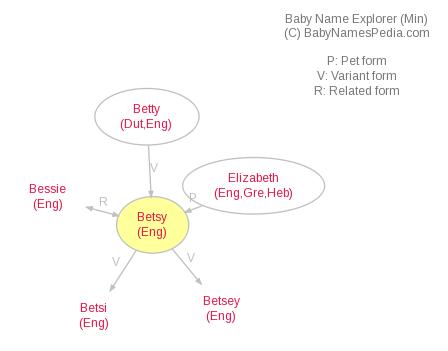