What does Bette mean?

[ 1 syll. bet-te, be-tte ] The baby girl name Bette is pronounced as BEHT or BEH-Tiy †. Bette is mainly used in the English and French languages, and it is of Hebrew origin. The name was first made famous as a French diminutive of Elizabeth in La Cousin Bette (1846), a French novel by Honoré de Balzac. It is also known from the American film actresses Bette Davis (1908-1989) and Bette Midler (1944-), for whom the names are pronounced 'Betty' and 'Bet' respectively.

Bette is a variant form of the Dutch and English name Betty in the French language.

Bette is also a pet form of the English, Greek, and Hebrew name Elizabeth in the English and French languages.

Variant forms share the origin and meaning of the name Bette.

Bette is unusual as a baby name for girls. Its usage peaked modestly in 1923 with 0.135% of baby girls being given the name Bette. Its ranking then was #147. The baby name has since substantially fallen in popularity, and is today of sporadic use. In 2018, among the group of girl names directly linked to Bette, Elizabeth was the most popular. 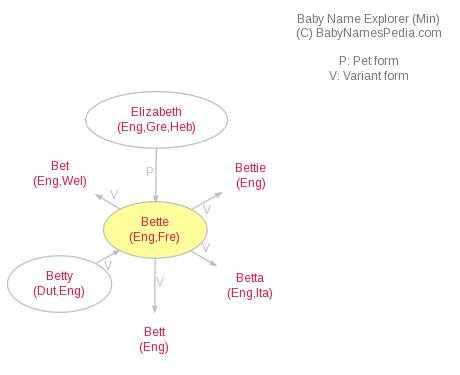