What does Beulah mean?

[ 2 syll. beu-lah, be-ul-ah ] The baby girl name Beulah is pronounced BYUW-Lah in English †. Beulah's language of origin is Hebrew and it is predominantly used in English. Biblical name: Beulah's meaning is 'she who is married'. In the Bible, Beulah was used as another name for Israel by the prophet Isaiah. In Hebrew, the phrase 'the land of Beulah' is symbolic of the heavenly Zion. This has been mirrored in literature, where it appears in John Bunyan's allegory The Pilgrim's Progress (1678) as the land of heavenly joy at the end of man's journey. Due to its biblical associations, the name was adopted in England during the Reformation, and was well used by the Puritans in the 17th century. It has been popular particularly among Afro-Americans.

Beulah is an uncommon baby name for girls. At the height of its usage in 1901, 0.338% of baby girls were named Beulah. It ranked at #74 then. The baby name has since steeply dropped in popularity, and is currently of only very modest use. Within all girl names in its group, Beulah was nevertheless the most widely used in 2018. 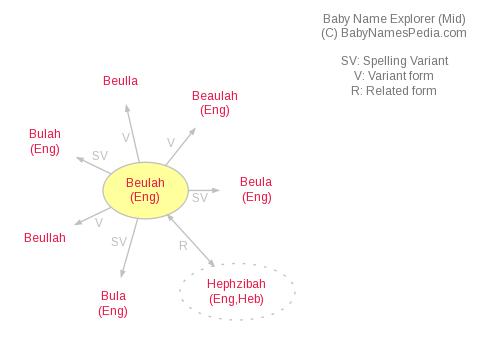