What does Bianca mean?

[ 2 syll. bian-ca, bi-a-nca ] The baby girl name Bianca is pronounced BYAAN-Kaa in Romanian †. Bianca's language of origin is Italian and Old French. It is predominantly used in English, Italian, Romanian, German, Hungarian, and Spanish. Italian origin, English, Italian, and Romanian use: It is derived literally from the word bianca which is of the meaning 'white, pure'. The name was first used by English speakers in the 16th century. In literature, it has been used by Shakespeare for the sister of the 'shrew' in Taming of the Shrew (1593) and a courtesan in Othello (1603); both of these plays are set in Italy.

Bianca is a variation (German, Hungarian, Italian, Romanian, and Spanish) of Blanche (English and French).

Bianca has 18 variations that are used in English and foreign languages. English variations of the name include Beonca, Beyonca, Bia (used in African and Swahili too), Biana, Biancia, Bianey, Biankeh, Bianna, Biannca, Blanca, Blanch, Blanka, Byanca, Byanka, and Vianca (used in Spanish too). Another English form is the spelling variant Bionca. Blanche (French) is a variation of Bianca that is used in foreign languages. The spelling variant Bianka (Hungarian, Polish, and German) is another foreign form.

Bianca is a rather popular baby girl name. The name's popularity increased from the 1970s up to the 1990s; before that, it was of only very modest use. At the height of its usage in 1991, 0.189% of baby girls were named Bianca. It was #89 in rank then. The baby name has seen a drop in popularity since then. In 2018, it ranked at #403 with a usage of 0.041%, but it was nevertheless the most popular within all girl names in its family. 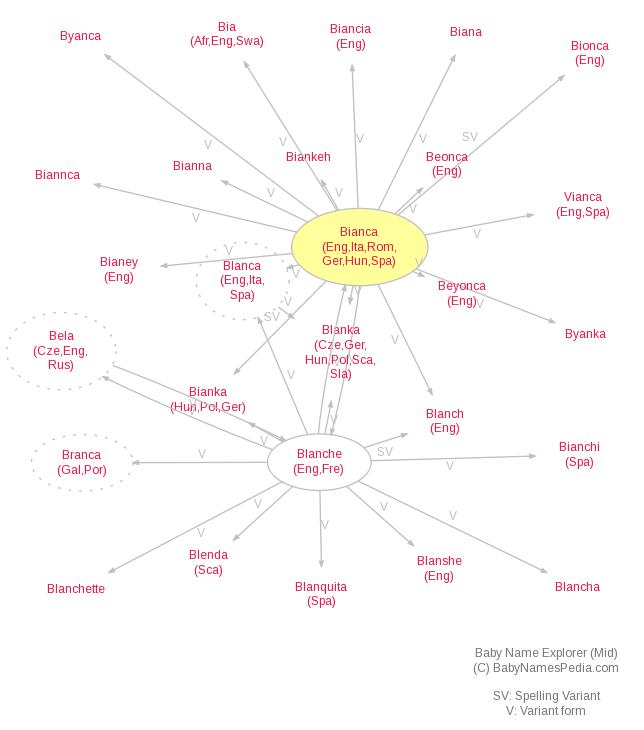