What does Billy mean?

[ 2 syll. bil-ly, bi-lly ] The baby boy name Billy is also used as a girl name, but it is much more common for boys. Its pronunciation is BIHL-iy- †. Billy is largely used in the English and German languages, and its origin is Germanic. The name has been made known by the American outlaw and folk hero Billy the Kid (Henry McCarty, 1859-1881), who also went by the alias William H. Bonney.

Billy is an English and German diminutive form of the name William (English and French).

Bilie, Bill, Billey, and Bily are variants of Billy.

Billie (English variant spelling) is another form of Billy.

Billy is a classic favorite. Currently it is still somewhat popular as a baby name for boys, though it was in more widespread use before. The name's popularity jumped from the 1900s up to the 1930s. At the peak of its usage in 1934, 0.900% of baby boys were given the name Billy. It ranked at #20 then. The baby name has since suffered a substantial loss in popularity. In 2018, its usage was only 0.013% and its ranking #845. Out of the group of boy names directly linked to Billy, William was the most frequently used. In 2018, it was used 56 times more than Billy. Billy has mostly been a baby boy name in the past century. In 1945, the name Billy was given to 93 times as many baby boys than girls. 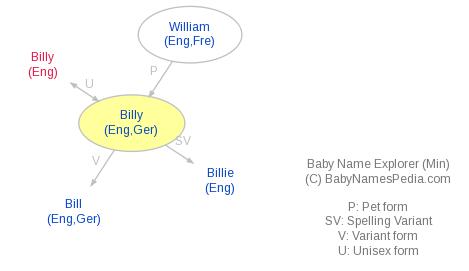