What does Bina mean?

[ 2 syll. bi-na, bin-a ] The baby girl name Bina is also used as a boy name, though the use for girls is far more popular. It is pronounced as BIHN-aa- or BIY-Naa- †.

Bina's language of origin is Hebrew and it is also predominantly used in Hebrew. The name is used as a translation of the Hebrew Devorah, from the Yiddish bine, although it has sometimes been associated with the Hebrew element bina.

Bina has 14 forms that are used in English and foreign languages. English forms of the name include Bean, Bena, Binna, Binney, Binta, Bintah, Byna, Bynah, and Bynna.

Bina's language of origin is African. The meaning here is 'dance'.

In addition, Bina is a Czech and Italian shortening of the English, German, Italian, Polish, Russian, and Slavic Albina.

Bina is also a Czech, English, Hebrew, and Italian shortening of Sabina.

Bina is uncommon as a baby girl name. In 1900, 0.005% of baby girls were named Bina. It had a ranking of #974 then. The baby name has seen a drop in frequency since then, and is of irregular use now. In 2018, within the family of girl names directly related to Bina, Deborah was the most widely used. 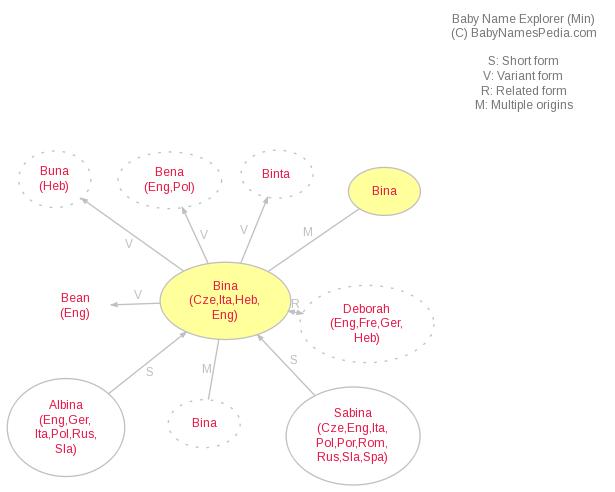