What does Birgitta mean?

[ 3 syll. bir-git-ta, bi-rgi-tta ] The baby girl name Birgitta is pronounced as B-erJHIY-Taa- †. Birgitta is mainly used in Scandinavian. It is of Old Norse and Celtic origin. The name is usualy taken as a Scandinavian form of Bridget, although it is most likely the feminine for Birger. Saint Birgitta (1303-1373) was a mystic who founded Ireland's first religious women's community, the Bridgettine order of nuns. Her father was named Birger.

In addition, Birgitta is a variant form of the German and Scandinavian name Birgit in the Scandinavian language.

Birgitta is also a variant form of the English, Irish, and Scottish name Bridget in the Scandinavian language.

The Dutch and Scandinavian Birgitte, the English Birigita, and the Finnish Pirjo are variant forms of the name.

Variant forms share the origin and meaning of the name Birgitta.

Birgitta is an uncommon baby girl name. It is not in the top 1000 names. In 2018, among the family of girl names directly related to Birgitta, Bridget was the most regularly used. 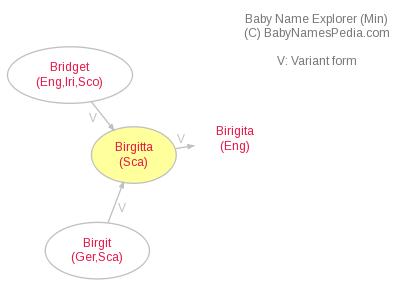