What does Blaise mean?

[ 1 syll. blai-se, bl-a-ise ] The baby boy name Blaise is also used as a girl name, but it is much more common for boys. Its pronunciation is BLeh-Z †. Blaise is used predominantly in the English and French languages, and it is derived from Latin origins. It is derived from the element 'blaesus' which means lisping, stammering. Blasius (Latin) is an older form of Blaise. The name was borne by the 4th-century Saint Blaise, a venerated physician and bishop of Sebaste in Armenia. In Catholic custom, he is the patron saint of wool combers, in part due to the instruments of his martyrdom, iron carding combs. In Arthurian legend, Blaise was the secretary of Merlin who recorded the teachings of his master. The name is popular in France due to the fame of the French philosopher Blaise Pascal (1623-1662).

The name Blaise is used to a great extent; it has 32 variants that are used in English and other languages. Variants used in English include Ballas, Blaes, Blaese, Blais, Blaisdell, Blaisot, Blaize, Blasien, Blasius, Blays, Blayse, Blayze, and Blaze (also used in Latin). The variant spelling Blase is another English form.

Blaise is uncommon as a baby name for boys. At the modest height of its usage in 2015, 0.014% of baby boys were given the name Blaise. It ranked at #805 then. The baby name has since dropped out of favor, and is currently of sporadic use. In 2018, within the group of boy names directly linked to Blaise, Blaze was the most frequently used. Blaise has mostly been a baby boy name in the past century. 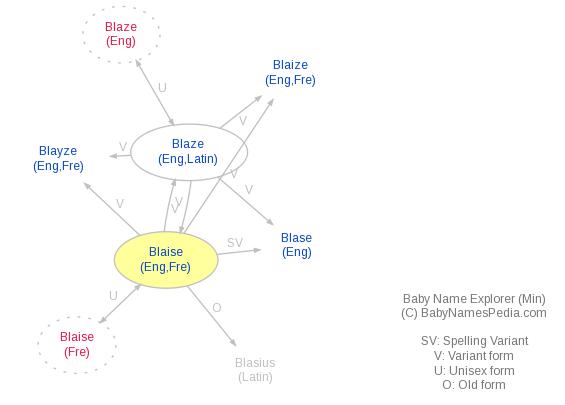